This is Cricket: In the Spirit of the Game (Hardcover) 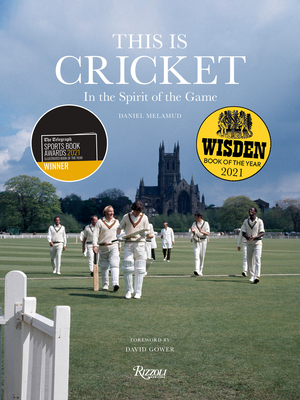 A celebration of the elegance and timeless beauty of cricket--its greatest and most stylish players, from past heroes to today's stars, along with its idyllic and hallowed grounds.

Cricket has been played for over three hundred years and in some ways remains largely unchanged. It is this timelessness, and the style and spirit in which the game is conducted, which is celebrated in This Is Cricket.
The book brings together such idyllic settings as Sir Paul Getty's Ground in Buckinghamshire, U.K., surrounded by rolling countryside, with the Otago cricket ground in New Zealand set against a backdrop of mountains, as well as the sport's most hallowed pitches, including Lord's (opened by Thomas Lord in 1814) and Melbourne Cricket Ground, which hosted the first-ever International "Test" match in 1877.
Readers will venture on a journey to the Caribbean, where the fast bowling attack of the West Indies reigned in the 1970s, and to India, where cricket soared to new heights in the 1980s. From Shane Warne's hat-trick at the MCG in 1994 to Ben Stokes's heroics at Lord's and Headingley in 2019, This Is Cricket captures many of the game's most extraordinary events and players. The striking images of on-field action as well as candid dressing-room moments, some published here for the first time, are taken by some of the most respected photographers in sport.
Featuring bucolic village greens, charming pavilions, endearing team portraits, extraordinary catches, devastating bowling, heroic batting, stylish sweaters, and silly fancy dress, this book illustrates why cricket is the second most popular sport in the world and why it is truly loved by so many.

Daniel Melamud is a writer, editor, photographer, and lifelong cricket enthusiast who captained his primary-school cricket team to a comprehensive defeat at Lord's. David Gower played in 117 Test matches for England between 1978 and 1992, and captained them to a memorable victory in the 1985 Ashes series. He was celebrated throughout the cricket world for the grace and elegance of his batting. Since retiring from playing Gower has been a much-loved commentator.

“A gorgeous new release from Rizzoli containing photographs of the game in panorama, from village greens in England to the Nehru Stadium in India and much besides. Make room for this one next to your Wisdens.”
—The New Criterion

“Maybe at Christmas time you are pining for some feelgood fare… This Is Cricket: In the Spirit of the Game by Daniel Melamud is a cricket/art book published in New York and one that requires quite a big coffee table to accommodate it. Inside are hundreds of photographs, some well-known classics, others fresh and unfamiliar. All delightfully portray a cricketing landscape that has temporarily gone missing.” —The Guardian

“Stumped for Christmas gift ideas? Jon Hotten, Wisden Cricket Monthly’s reviews editor picks out his favourite books of the year: To say that it’s been a strange year probably undersells 2020’s capacity for terrifying weirdness, and yet despite everything it has had its uplifting moments…Daniel Melamud’s This Is Cricket (Rizzoli) is a coffee-table collection of beautifully reproduced photographs of cricket and cricketers from across the world, just what you need for those deep midwinter nights.”—Wisden Cricket Monthly (featured in ‘12 Books for Christmas’)

"Games can take several days, with tea breaks at four o’clock, and the lexicon, with terms such as 'square leg' and 'gully,' make its field positions sound more like pirate slang than sports talk. And yet the appeal of this distant cousin to American baseball—white outfits, green lawns, team camaraderie—endures, as evidenced by the picturesque, action-filled photographs in Daniel Melamud’s new book, This Is Cricket. Shots include several from Patrick Eagar—'a master if not the master of the lens and a genius at catching the moment,' writes former England captain David Gower in the foreword to the book—and chronicle all aspects of the sport: 'A sponsor’s tent, a fabulous cold buffet, potent glasses of Pimm’s and the afternoon took care of itself,' Gower recalls of a day spent on and (mostly) off the field due to intermittent rain. He adds, 'If these many gorgeous images don’t bring a smile to your face, I’m afraid you’re probably not human.'"
—Air Mail

"Featuring over 300 jaw dropping images, expertly written text, and a foreword from the iconic English cricket commentator David Gower, This Is Cricket pays homage to the eternal elegance of cricket…it’s also the perfect entry for anyone who is just starting to take a shine to this classic sport."
—DeFY New York

"Rizzoli’s new hardcover book This Is Cricket celebrates the timeless game, from the best and most stylish players to the hallowed grounds on which it’s played. Why we want it: maybe this is how we finally learn the rules of cricket."
—UrbanDaddy