The Anatomy of Story: 22 Steps to Becoming a Master Storyteller (Paperback) 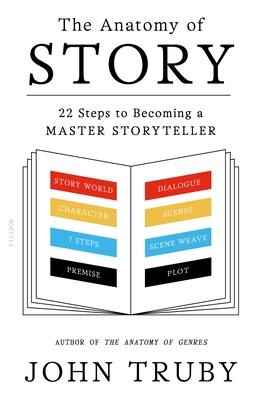 The Anatomy of Story: 22 Steps to Becoming a Master Storyteller (Paperback)

"If you're ready to graduate from the boy-meets-girl league of screenwriting, meet John Truby . . . [his lessons inspire] epiphanies that make you see the contours of your psyche as sharply as your script."
—LA Weekly

John Truby is one of the most respected and sought-after story consultants in the film industry, and his students have gone on to pen some of Hollywood's most successful films, including Sleepless in Seattle, Scream, and Shrek. The Anatomy of Story is his long-awaited first book, and it shares all his secrets for writing a compelling script. Based on the lessons in his award-winning class, Great Screenwriting, The Anatomy of Story draws on a broad range of philosophy and mythology, offering fresh techniques and insightful anecdotes alongside Truby's own unique approach to building an effective, multifaceted narrative.

John Truby is the founder and director of Truby’s Writers Studio. Over the past thirty years, he has taught more than fifty thousand students worldwide, including novelists, screenwriters, and TV writers. Together, these writers have generated more than fifteen billion dollars at the box office.

Truby has an ongoing program where he works with students who are actively creating shows, movies, and novel series. He regularly applies his genre techniques in story consulting work with major studios including Disney, Sony Pictures, Fox, HBO, the BBC, Canal Plus, Globo, and AMC. He lives in Los Angeles with his wife, Leslie, and their two cats, Tink and Peanut.

“Truby attempts to inform the entire story, addressing plot, character, tone, symbolism, and dialog. The key here is to grow a script organically rather than force the story into preexisting mechanics . . . Highly recommended.” —Library Journal

“A comprehensive guide to writing stories of all kinds, Truby's tome is invaluable to any writer looking to put an idea to paper.” —Booklist

“The Anatomy Of Story is concrete and practical without resorting to simplistic 'Three Act Structure' screenwriting clichés. It will be an indispensable guide to writing your first great script. Then, the perfect survival manual to help you negotiate the often confusing, contradictory and cutthroat world of professional screenwriting.” —Larry Wilson, co-writer /co-producer of BEETLEJUICE and co-writer of THE ADDAMS FAMILY

“A veritable bible for screenwriters.” —Backstage

“If you're ready to graduate from the boy-meets-girl league of screenwriting, meet John Truby . . . [His lessons draw] epiphanies that make you see the contours of your psyche as sharply as your script.” —LA Weekly