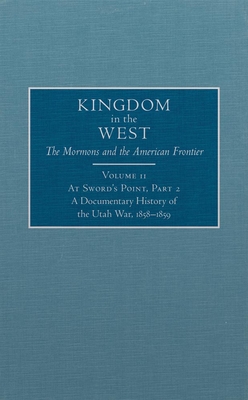 The Utah War--an unprecedented armed confrontation between Mormon-controlled Utah Territory and the U.S. government--was the most extensive American military action between the U.S.-Mexican and Civil Wars. Drawing on author-editor William P. MacKinnon's half-century of research and a wealth of carefully selected new material, At Sword's Point presents the first full history of the conflict through the voices of participants--leaders, soldiers, and civilians from both sides. MacKinnon's lively narrative, continued in this second volume, links and explains these firsthand accounts to produce the most detailed, in-depth, and balanced view of the war to date. At Sword's Point, Part 2 carries the story of the Utah War from the end of 1857 to the conclusion of hostilities in June 1858, when Brigham Young was replaced as territorial governor and almost one-third of the U.S. Army occupied Utah. Through the testimony of Mormon and federal leaders, combatants, emissaries, and onlookers, this second volume describes the war's final months and uneasy resolution. President James Buchanan and his secretary of war, John B. Floyd, worked to break a political-military stalemate in Utah, while Mormon leaders prepared defensive and aggressive countermeasures ranging from an attack on Forts Bridger and Laramie to the "Sebastopol Strategy" of evacuating and torching Salt Lake City and sending 30,000 Mormon refugees on a mass exodus and fighting retreat toward Mexican Sonora. Thomas L. Kane, self-appointed intermediary and Philadelphia humanitarian, sought a peaceful conclusion to the conflict, which ended with the arrival in Utah of President Buchanan's two official peace commissioners, the president's blanket pardon for Utah's population, and the army's peaceful march into the Salt Lake Valley. MacKinnon's narrative weaves a panoramic yet intimate view of a turning point in western, Mormon, and American history far bloodier than previously understood. With its sophisticated documentary analysis and insight, this work will stand as the definitive history of the complex, consequential, and still-debated Utah War.