The Last Cowboy: A Life of Tom Landry (Hardcover) 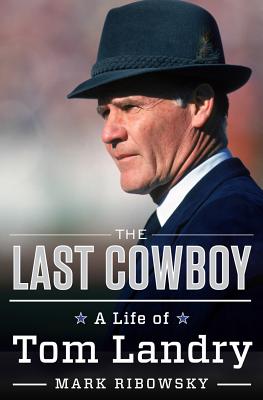 A Publisher's Weekly Best Book of 2013

An action-packed biography of a man, his team, and the league he helped create—in the tradition of Maraniss’s When Pride Still Mattered.

Tom Landry, the coach during professional football's most fabled era, transformed the gridiron from a no-holds-barred battlefield to the technical chess match it is today. With his trademark fedora and stoic facade, "God’s Coach" was a man of faith and few words, for twenty-nine years guiding "America's Team" from laughingstock to well-oiled machine, with an unprecedented twenty consecutive winning seasons and two Super Bowl titles. Now, more than a decade after Landry's death, acclaimed sports biographer Mark Ribowsky finally takes a fresh look at this much-misunderstood legend, giving us a distinctly American biography that tells us as much about our country's fascination with football as it does about Landry himself.


While his coaching years are set against the backdrop of a nation roiling with racial and political turmoil—and the anything-goes partying constantly threatening the all-American mystique—The Last Cowboy begins amid the dusty roads of Mission, Texas, where Tom Landry’s childhood played out like a homespun American fable. It then takes us to the war-torn skies over western Europe, where the straight-A student and high school football star piloted a B-17 through thirty harrowing, at times near-fatal, missions. And finally back to a booming Texas, where he continued his faithful march toward gridiron immortality.

In between, however, we learn that Landry was an infinitely more complex figure than his legions of fans and critics could have ever imagined. Indeed, for all his restrained emotions and old-world courtliness, he was a man of great reach and curiosity: an art and wine connoisseur, a world traveler, a collector of first-edition old-West literature. Drawing from dozens of exclusive interviews, Ribowsky reveals that Landry was anything but "cold," and it was actually his depth as a human that positioned him to become an avatar of change, first as the civil rights movement spilled onto the field and, later, as the game of football transformed into something unrecognizable to those who had come before him.

But Landry's virtues notwithstanding, he was hardly perfect and nor were his players. From the unending quarterback controversies between Roger Staubach and Craig Morton to the locker room battles with Duane Thomas and Thomas “Hollywood” Henderson to the heartbreaking loses suffered at the hands of Landry’s only true rival, Vince Lombardi, The Last Cowboy becomes a fascinating portrait of a fiercely Christian man desperately trying to stay the course in a city whose flamboyance mirrored that of the team he built.

The result is a definitive biography that will frame its subject within a larger American panorama while also reintroducing us to a legend whose impact on the NFL, and the sport itself, is nothing short of immeasurable.

Mark Ribowsky is a New York Times acclaimed, best-selling author of fifteen books, including biographies of Tom Landry, Al Davis, Hank Williams, and most recently, In the Name of the Father: Family, Football, and the Manning Dynasty. He lives in Florida.lorida.

[Ribowsky] recounts Landry’s life honestly, avoiding both distortion and hagiography while portraying a stoic, flawed man of honor…. A triumph of extensive research and interviews. It will be welcomed by all football fans.
— Library Journal, starred review

A meaty biography of one of the NFL’s legendary coaches…. [Ribowsky] provides as complete a picture of ‘God’s Coach’ as we’re likely to get. A must-read for fans of America’s Team and, given Landry’s impact on the game, for Cowboy haters too.

Fascinating…. Readers looking for a recap of one of football’s greatest innovators and coaches will be enthralled.
— Booklist

[A] huge and hugely entertaining biography…. Extraordinary…. That Ribowsky, an outstanding biographer with books on Al Davis, Satchel Paige and Howard Cosell to his credit, doesn’t idolize Landry across the book’s 640 pages makes his judgment all the keener.
— Allen Barra - Dallas Morning News