The Last Cowboy: A Life of Tom Landry (Paperback) 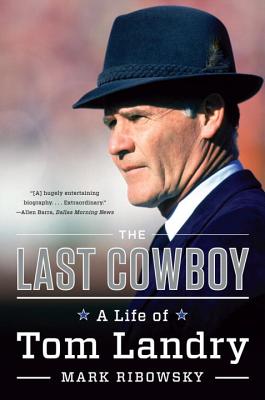 “An eloquent, honest tribute to a sports genius.” —Publishers Weekly, Best 100 Books of 2013

As the coach during professional football’s most storied era, Tom Landry transformed the gridiron from a no-holds-barred battlefield to the highly-technical chess match it is today. With his trademark fedora and stoic facade, he was a man of faith and few words, for twenty-nine years guiding “America’s Team” from laughingstock to well-oiled machine, with an unprecedented twenty consecutive winning seasons and two Super Bowl titles. Now, more than a decade after Landry’s death, acclaimed biographer Mark Ribowsky takes a fresh look at this misunderstood legend, telling us as much about our country’s obsession with football as about Landry himself, the likes of whom we’ll never see again.

Mark Ribowsky is a New York Times acclaimed, best-selling author of fifteen books, including biographies of Tom Landry, Al Davis, Hank Williams, and most recently, In the Name of the Father: Family, Football, and the Manning Dynasty. He lives in Florida.lorida.

[Ribowsky] recounts Landry’s life honestly, avoiding both distortion and hagiography while portraying a stoic, flawed man of honor…. A triumph of extensive research and interviews. It will be welcomed by all football fans.
— Library Journal, starred review

A meaty biography of one of the NFL’s legendary coaches…. [Ribowsky] provides as complete a picture of ‘God’s Coach’ as we’re likely to get. A must-read for fans of America’s Team and, given Landry’s impact on the game, for Cowboy haters too.

Fascinating…. Readers looking for a recap of one of football’s greatest innovators and coaches will be enthralled.
— Booklist

[A] huge and hugely entertaining biography…. Extraordinary…. That Ribowsky, an outstanding biographer with books on Al Davis, Satchel Paige and Howard Cosell to his credit, doesn’t idolize Landry across the book’s 640 pages makes his judgment all the keener.
— Allen Barra - Dallas Morning News