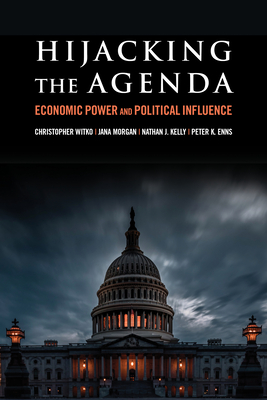 Why are the economic interests and priorities of lower- and middle-class Americans so often ignored by the U.S. Congress, while the economic interests of the wealthiest are prioritized, often resulting in policies favorable to their interests? In Hijacking the Agenda, political scientists Christopher Witko, Jana Morgan, Nathan J. Kelly, and Peter K. Enns examine why Congress privileges the concerns of businesses and the wealthy over those of average Americans. They go beyond demonstrating that such economic bias exists to illuminate precisely how and why economic policy is so often skewed in favor of the rich.

The authors analyze over 20 years of floor speeches by several hundred members of Congress to examine the influence of campaign contributions on how the national economic agenda is set in Congress. They find that legislators who received more money from business and professional associations were more likely to discuss the deficit and other upper-class priorities, while those who received more money from unions were more likely to discuss issues important to lower- and middle-class constituents, such as economic inequality and wages. This attention imbalance matters because issues discussed in Congress receive more direct legislative action, such as bill introductions and committee hearings. While unions use campaign contributions to push back against wealthy interests, spending by the wealthy dwarfs that of unions.

The authors use case studies analyzing financial regulation and the minimum wage to demonstrate how the financial influence of the wealthy enables them to advance their economic agenda. In each case, the authors examine the balance of structural power, or the power that comes from a person or company’s position in the economy, and kinetic power, the power that comes from the ability to mobilize organizational and financial resources in the policy process. The authors show how big business uses its structural power and resources to effect policy change in Congress, as when the financial industry sought deregulation in the late 1990s, resulting in the passage of a bill eviscerating New Deal financial regulations. Likewise, when business interests want to preserve the policy status quo, it uses its power to keep issues off of the agenda, as when inflation eats into the minimum wage and its declining purchasing power leaves low-wage workers in poverty. Although groups representing lower- and middle-class interests, particularly unions, can use their resources to shape policy responses if conditions are right, they lack structural power and suffer significant resource disadvantages. As a result, wealthy interests have the upper hand in shaping the policy process, simply due to their pivotal position in the economy and the resulting perception that policies beneficial to business are beneficial for everyone.

Hijacking the Agenda is an illuminating account of the way economic power operates through the congressional agenda and policy process to privilege the interests of the wealthy and marks a major step forward in our understanding of the politics of inequality.

Nathan J. Kelly is professor of political science at the University of Tennessee

Peter K. Enns is professor in the Department of Government at Cornell University

Hijacking the Agenda should have a big impact on how we think about Congress, policymaking, and political inequality. It provides an ambitious and creative analysis of an often-overlooked dimension of political power—the outsized role of the wealthy and well-organized in determining whose problems get addressed and whose get ignored.”

"To know who governs, we must know who controls the governing agenda. In this innovative book, four top political scientists show that the congressional agenda is disproportionately shaped by economic elites and the politicians most friendly to and funded by them. Combining sophisticated quantitative analysis and compelling case studies, Hijacking the Agenda sets a new standard for research on inequality and American democracy—and sounds a loud warning that all scholars and citizens should hear.”

“American politics is riven by deep inequalities, but political scientists have struggled to identify the impact of these inequalities on policymaking. Hijacking the Agenda represents a major step forward. Combining imaginative yet well-grounded theorizing with an impressive mix of empirical investigations, this innovative book sheds considerable light on how unequal power often generates unequal policies in the United States.”