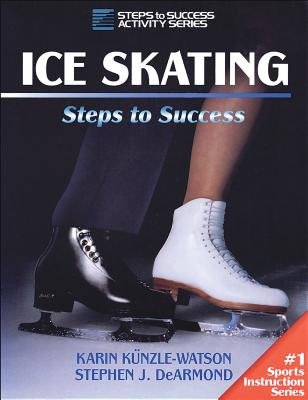 By Karin Kunzle-Watson, Stephen J. DeArmond
Email or call for price.
Out of Print

In Ice Skating: Steps to Success, Karin KÃ¯Â¿Å“nzle-Watson—nine-time Swiss National Champion, former Professional World Champion, and one of skating's best instructors—shares with readers the steps that she and many of her students learned on their way to becoming elite competitive skaters.

Most instruction books available on ice skating tend to focus on advanced jumps or spins, assuming the reader will learn the basics through professional instruction. Ice Skating: Steps to Success, however, covers fundamental skills in a way that's easy to understand and apply.

Part of the highly popular Steps to Success Series, this book includes 11 steps (chapters) that progress from basic to intermediate skills. It features over 300 illustrations that make it possible to learn proper form and technique. Readers will learn how to:

- attain the posture and control required for basic skills;
- use standard methods of gaining forward and backward speed;
- execute four different methods of stopping;
- fall properly and get up easily;
- change direction without loss of control; and
- control the skate edges in order to prepare for advanced maneuvers, including jumps, spins, and footwork.

With Ice Skating: Steps to Success, beginning and recreational skaters will develop a solid foundation of skills to help them gain confidence in their abilities and enjoy the sport more.

Karin KÃ¯Â¿Å“nzle-Watson, one of the world's most prominent ice skating instructors, began her amateur and professional skating career at the age of 6. A former champion at the novice and junior levels, Karin earned seven Swiss national senior titles during her career. She has also placed in many international competitions, including seven European championships, five World championships, and one Olympic appearance. She is one of the few people in the world to have passed Gold Tests (qualifying tests for competition at the highest levels) in all areas of skating—singles, pairs, and dance.

Karin is also an accomplished instructor, having been School Director and Head Professional at the Skating School of St. Gervais and MegÃ¯Â¿Å“ve (France) and School Director of the Skating School of San Mateo (U.S.). She presently travels internationally to attend her students' competitions, to teach, and to conduct skating and coaching seminars. Her students consistently rank highly in national and international competitions.

Stephen J. DeArmond, MD, PhD, began ice skating at the age of 47 because he wanted a high-energy, low-impact exercise that was enjoyable enough to do several times weekly. Karin KÃ¯Â¿Å“nzle-Watson's approach to basics helped him to become an accomplished recreational skater. Stephen helped Karin organize her lessons into five basic principles—the foundation of this book—and directed the illustration and photography.

Stephen is a Professor of Neuropathology and Neurology at the University of California, San Francisco, with special research interests in the effects of aging on the central nervous system and skeletal muscle. In this book, DeArmond shares insights on the health benefits of ice skating, especially to improve both strength and coordination, as well as information on the causes and prevention of injuries.

Stephen is the author and illustrator of Structure of the Human Brain, a best-selling textbook of neuroanatomy.

"With the help of Karin KÃ¯Â¿Å“nzle-Watson and Stephen J. DeArmond, thousands of people who never skated before can now find their way in this beautiful, though technically difficult, sport. Read it and try it, have fun, get your body physically involved and your mind mentally working. Have this book with you on every practice."
Tamara Moskvina, PhD
Olympic figure skating coach

"This book has a lot to offer someone who wants to learn the basics of ice skating."
Brian Boitano
Five-time Professional World Champion, Two-time World Champion, Gold Medalist, 1988 Olympics