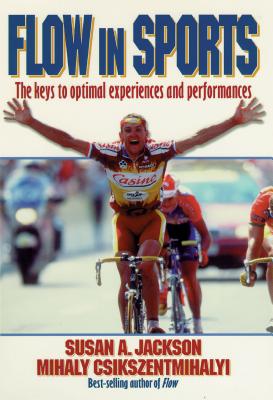 The experience of flow is still one of the least understood phenomena in sport. And yet it is one of the richest, most memorable experiences an athlete will ever know.

Some call it a natural high. Others refer to it as being in a zone. Whatever it's called, flow is an elusive and very sought-after psychological state that athletes, coaches, and sport psychologists have tried to understand, harness, and employ to their benefit since Mihaly Csikszentmihalyi first coined the term back in the early 1970s.

Now, in the first book devoted exclusively to flow in sports, the pioneering legend Csikszentmihalyi and sport psychology researcher Susan Jackson attempt not only to explain the phenomenon but also to identify the key conditions associated with its occurrence.

The book begins with a description of what flow is and is not. Flow is defined as a person's total absorption into an activity. While it is always a peak, satisfying experience, it is not necessarily associated with peak performance on every occasion.

Most of the book delves deeply into the key factors leading up to and accompanying the flow experience. The authors also recommend certain actions on the part of the athlete or coach to optimize the conditions in training and performance that allow flow to occur. The book is full of vivid examples, captivating quotes, and revealing research findings that enhance the authors' clear and insightful text.

The sport setting is rife with opportunities to experience flow-be it in pick-up games or the Olympics. But until now, flow has been an infrequent, accidental, and even mysterious phenomenon to most athletes. With Flow in Sports, this optimal experience becomes both more familiar and more achievable. Get to know flow, and get into it. Find out what you've been missing.

Susan Jackson and Mihaly Csikszentmihalyi combine their backgrounds to present the most authoritative work on the phenomenon of flow in sports, bringing together the expertise of the world's leading authority on flow with the leading researcher on the subject.

Susan Jackson, PhD, won two awards for her ground-breaking doctoral dissertation, titled Elite Athletes in Flow: The Psychology of Optimal Sport Experience. Jackson has continued to conduct research and publish articles on flow in sports, and is known internationally for her work on the subject.

She brings to her work the perspectives of athlete, coach, teacher, sport psychology consultant, and university lecturer. Jackson lives in Brisbane, Australia, and lectures in the School of Human Movement Studies at Queensland University of Technology.

Mihaly Csikszentmihalyi, PhD, developed the concept of flow in the mid-1970s and has pioneered research on the subject in work, social, and educational settings ever since. His early research on flow explored play and happiness and involved a number of prominent athletes. He has published 10 books, among them the ground-breaking Flow: The Psychology of Optimal Experience, as well as Creativity: Flow and the Psychology of Discovery and Invention and Finding Flow: The Psychology of Engagement With Everyday Life.

Csikszentmihalyi is an elected fellow of the American Academy of Arts and Sciences (1997) and the Hungarian Academy of Sciences (1998). He is the C.S. and D.J. Davidson Professor of Management at Claremont Graduate University in Claremont, California.

For many years, I've admired Dr. Csikszentmihalyi's pioneering work and tried to apply his concepts on the football field. Some people have labeled my approach as 'intense,' but the more accurate term might be 'in flow.' Being totally absorbed in the task at hand is essential to becoming a sports champion. Flow in Sports tells you how to get into that positive, winning mindset.
Jimmy Johnson
Head Coach and General Manager, Miami Dolphins
Head Coach, Super Bowl Champion Dallas Cowboys (1992 and 1993)
Head Coach, NCAA National Champion University of Miami (1987)

Flow in Sports is a fascinating read. Finally, someone has put into print what I always strive for when I work out and compete. For athletes who are looking for a book that shows how to maximize their sense of enjoyment and unleash their true potential, this is a goldmine of information.
Dan O'Brien
1996 Olympic Decathlon Champion