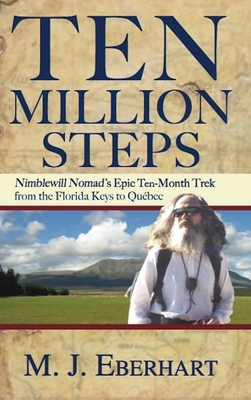 M. J. Eberhart, aka the Nimblewill Nomad, was a 60-year-old retired doctor in January 1998 when he set off on a foot journey that carried him 4,400 miles (twice the length of the Appalachian Trail) from the Florida Keys to the far north of Quebec. Written in a vivid journal style, the author unabashedly recounts the good (friendships with other hikers he met), the bad (sore legs, cutting winds and rain), and the godawful (those dispiriting doubts) aspects of his days of walking along what has since become known as the Eastern Continental Trail (ECT). An amazing tale of self-discovery and insight into the magic that reverberates from intense physical exertion and a high goal, Eberhart's is the only written account of a thru-hike along the ECT. Covering 16 states and 2 Canadian provinces, Ten Million Steps deftly mixes practical considerations of an almost unimaginable undertaking with the author's trademark humor and philosophical musings.

Best known by his trail name, Nimblewill Nomad, M. J. Eberhart, the son of a country doctor, grew up in a little village in the Ozark Highlands of Missouri. He's an Armed Forces veteran. After serving, he settled in as the senior practitioner in a busy three-doctor optometric practice in Florida. He's divorced, has two sons, Jay and Jon, and two dear granddaughters, Jillian Amber (Jay and Theresa) and Mia Simone (Jon and Terri). He now resides near his childhood home with his schoolmate and sweetheart, Dwinda. Eb, as most off-trail friends know him, began hiking and backpacking in the early '80s. Always an avid outdoorsman, now retired, he's making up for lost time after being cooped up in examination rooms with no windows for nearly 30 years.