The Track in the Forest: The Creation of a Legendary 1968 US Olympic Team (Hardcover) 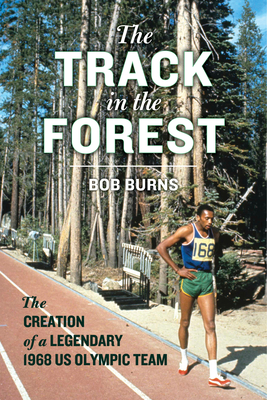 The 1968 US men’s Olympic track and field team won 12 gold medals and set six world records at the Mexico City Games, one of the most dominant performances in Olympic history. The team featured such legends as Tommie Smith, Bob Beamon, Al Oerter, and Dick Fosbury. Fifty years later, the team is mostly remembered for embodying the tumultuous social and racial climate of 1968. The Black Power protest of Tommie Smith and John Carlos on the victory stand in Mexico City remains one of the most enduring images of the 1960s. Less known is the role that a 400-meter track carved out of the Eldorado National Forest above Lake Tahoe played in molding that juggernaut. To acclimate US athletes for the 7,300-foot elevation of Mexico City, the US Olympic Committee held a two-month training camp and final Olympic selection meet for the ages at Echo Summit near the California-Nevada border. Never has a sporting event of such consequence been held in such an ethereal setting. On a track in which hundreds of trees were left standing on the infield to minimize the environmental impact, four world records fell—more than have been set at any US meet since (including the 1984 and 1996 Olympics). But the road to Echo Summit was tortuous—the Vietnam War was raging, Martin Luther King Jr. and Robert Kennedy were assassinated, and a group of athletes based out of San Jose State had been threatening to boycott the Mexico City Games to protest racial injustice. Informed by dozens of interviews by longtime sports journalist and track enthusiast Bob Burns, this is the story of how in one of the most divisive years in American history, a California mountaintop provided an incomparable group of Americans shelter from the storm.

Bob Burns served as sports editor of the Tahoe Daily Tribune and as a senior writer at the Sacramento Bee. He has also written for the Chicago Tribune, Golf Digest, and the San Francisco Examiner. Burns served as communications director for the 2000 US Olympic Track and Field Trials and spearheaded the designation of Echo Summit as a California State Historical Landmark.

"Capturing the tenor, the feel, of any year—never mind the tortured days of 1968—is usually a fool's mission. But by attacking the subject in miniature, via probing interviews and exhaustive research on the US Olympic track team as it barreled toward Mexico City, Bob Burns pulls it off. That so diverse a group vividly reflected the nation's tumult comes as no shock. What's stunning is how their days on that high, remote track, then and now, allowed so many a measure of peace." —S.L. Price, Sports Illustrated senior writer and author of Playing Through The Whistle: Steel, Football, and an American Town


“Who knew that the seeds for the now historic performances of US track and field athletes in the 1968 Mexico City Olympic Games, in the midst of tumultuous and tragic times in America, were sown in the unlikely setting of a California mountaintop? Bob Burns knew, and he now tells the tale with grace and insight in this compelling book.” —Ira Berkow, Pulitzer Prize-winning columnist and sport journalist

“The Track in the Forest captures an unforgettable period in my life and the lives of all who experienced the majesty of Echo Summit. From the tumult of 1968 to the aroma of the magnificent ponderosa pines, Bob does the story justice.” —Ralph Boston, gold medal-winning Olympic long jumper


"Burns does a masterful job weaving the narratives of the men training together, vying for coveted spots on the U.S. team in an idyllic setting, a stark contrast to the turbulent events shaking the country." —Booklist