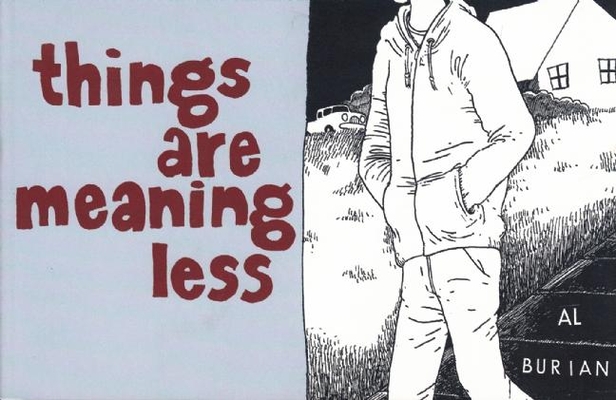 Opening with a telling quote from punk band Black Flag (Drink black coffee/drink black coffee/drink black coffee/and stare at the wall), Things Are Meaning Less is a tough, funny, heartbreaking look at young, disillusioned American life. You might know Al from his zines Burn Collector and Natural Disasters or from the band Milemarker or his so-true-it-kicks-your-face-off column in Punk Planet. This, however, is Al's collection of comics published in the late '90s by designer and fellow zinester Ian Lyman. From Portland to Providence, Al patrols his world with a dark, stoic humor. He's a Saul Bellow-ian everyman, up against the wall, suffering the blows, looking for love and loving the metal. Like Al's latest issue of Burn Collector, the comic-heavy #14, the drawing here is simple but it's the kind of simple that doesn't come with beginner's luck. The stuff here is the result of years of fighting and trouble-making, of mistakes made and a life scratched out among the sticks and stones. As says Al, These are things drawn on napkins in airports, xeroxed illicitly during work. So goes the work and world of Al Burian.

Al Burian is the author of two collections of his zines: Burn Collector and Natural Disaster.