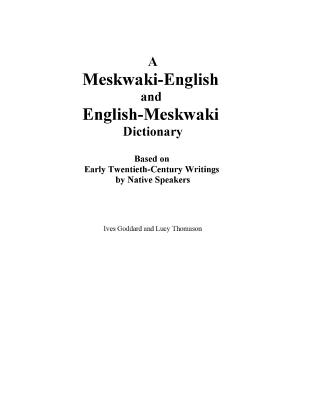 By Ives Goddard (Compiled by), Lucy Thomason (Compiled by)
Email or call for price.
Usually Ships in 2-3 Days

A Meskwaki-English and English-Meskwaki Dictionary, Based on Early Twentieth-Century Writings by Native Speakers, by Ives Goddard and Lucy Thomason. The vocabulary is mostly from the writings of William Jones and the extensive Truman Michelson collection of manuscript texts in the National Anthropological Archives of the Smithsonian Institution, interpreted on the basis of earlier studies by Jones, Michelson, Leonard Bloomfield, and Paul Voorhis and 15 years of recent fieldwork at the Meskwaki Settlement in Tama County, Iowa. Meskwaki is one of the most archaic members of the Algonquian language family, attesting many features that are useful in understanding its sister tongues. The dictionary includes vocabulary for traditional ways of life and mythic worlds that were ancient even at the time they were written down a century ago. There are six appendixes: for animals, birds, bodyparts, the calendar, numbers (and how to count), and kinship terminology. The introduction also includes a brief synopsis of grammar as a guide. A fully phonemic practical spelling is used. The name Meskwaki (earlier Mesquakie) replaces the historical name Fox, which has been used in many publications. The full official name of the people who speak Meskwaki is the Sac and Fox Tribe of the Mississippi in Iowa.