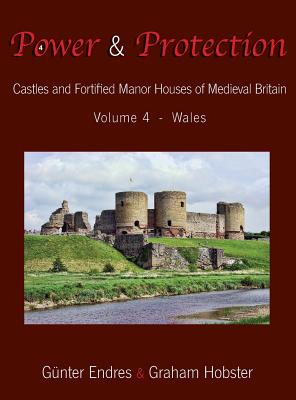 This is book number 4 in the Power and Protection series.

The unexpected sight of a stark ruin, perhaps a once formidable fortress clinging to a high summit or a crenellated residence with fading remnants of former affluence, always evokes a mix of strong emotions. It might generate a thirst for a deeper understanding of its history and why it was allowed to decay, and of the bloody battles that may have been fought for control over its strategic location. We may wonder what historically significant events may have taken place within, which powerful Kings and knights bestrode its battlemented walls, or what mysteries lie hidden beneath the rubble. Do we stand in awe of the absolute power over life and death once held by kings and noblemen, or are we fascinated by our occasionally chivalrous, but more often bloody, past? Are we ourselves pacing the broken battlements fully armed and unflinching to repel imagined raiders? Those of us with more romantic notions may associate the ragged stone structures rising on isolated islands with gallant knights, damsels in distress and broken hearts. Whatever we may see in the many ruins that have defiantly overseen our green and pleasant land for nearly one thousand years, it is certain that each of us will take something of personal interest from a visit. If nothing else, it has to be an appreciation of the skills of the medieval master builders and sheer amazement that so much of their work has survived at all.

While I have focused intensively on the text, both in evaluating the remains and providing brief histories, my good friend and collaborator, Graham Hobster, has applied his considerable photographic and layout skills to create what we modestly consider a major work on this extensive subject and one that has been designed to encourage the reader to learn about these numerous ancient survivals. These range from the great castles of the Tower of London, Alnwick, Bamburgh, Dover, Warkworth, Warwick, Windsor, Caernarfon, Caerphilly, Conwy, Harlech and Pembroke, to the many fortified manor houses of the high-status medieval nobility. I cannot take credit for the wealth of historic information accompanying the photographs. I merely summarised the often intriguing, but always interesting histories of the various houses many eminent persons have painstakingly assembled over centuries from ancient documents. I have, however, checked historic records for accuracy.

During our near twenty-year collaboration, we have visited virtually all the stone castle remains described in this book and have taken numerous photographs. Others have generously permitted the use of their photographs in places we have been unable to reach. Our selection, while limited by restrictions of size, has been made to illustrate some of the more interesting features on each site, as well as the elaborate military architectural and engineering detail that has survived in many locations. It is hoped that these might encourage a visit when in the vicinity, or persuade some intrepid adventurers that a long journey would be worthwhile. The numerous pele towers and bastles in the northern counties would fill a separate book. We believe that there are no major omissions, and, for the first time, there is a comprehensive illustrated guide to lead the way.

Had it not been for the preservation efforts of the Ministry of Works in the early twentieth century and continued under English Heritage, the National Trust, and CADW in Wales, helped by more sympathetic landowners and numerous volunteers, many of these wonderful ruins in England would have been lost forever. And with them a large part of a military heritage that dates back to the Norman Conquest. I fear, however, that many of the lesser remains still in private hands may in time disappear. Not through wilful destruction, as in the past, but through sheer neglect and disinterest. It must not be allowed to happen.