Leo Fender: The Quiet Giant Heard Around the World (Hardcover) 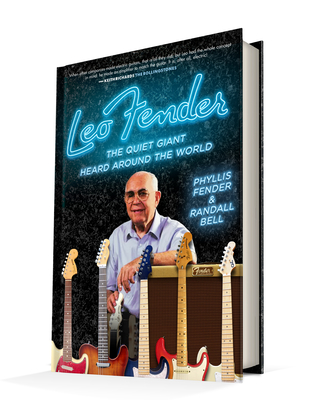 Occasionally, the world produces one of those rare thinkers that alter the course of history.
Disney reinvented entertainment, Einstein revolutionized science, Edison lit up our lives with the light bulb, Bell got the world talking with the telephone ... and Fender revolutionized music.
If you think about it, Leo Fender has influenced every person on earth today - at least everyone who has ever heard a song.
Guitar Player Magazine declared that Clarence Leo Fender is the father of the solid body guitar. Not only did he invent it, but Leo's guitars were used by everyone from Elvis Presley, to Eric Clapton and from Jimmy Page to Jimmy Hendrix. Indeed, Rolling Stone Magazine published a list of the world's top 100 guitarists, and 90 of them used one of Leo's guitars on stage, and the others used guitars that copied Leo's inventions and concepts.
Leo Fender was shy, had one glass eye, and was nearly deaf. Yet, from the small town of Fullerton, California, he built an iconic worldwide empire that is worshiped by the rock stars themselves. The highest price ever spent for music memorabilia was not for Michael Jackson's glove, original Beatles' handwritten lyrics or even Elvis' killer pantsuit. It was for a Fender Stratocaster, which sold for a staggering $2.7 million.
Written by the wife of the late Leo Fender, for the very first time, this book provides a rare look into the wonderful mind and world of this quiet genius.