The Danaher Diaries: Over 100 of John Danaher's Musings on Jiu-Jitsu, Kaizen, Training, and Living (Paperback) 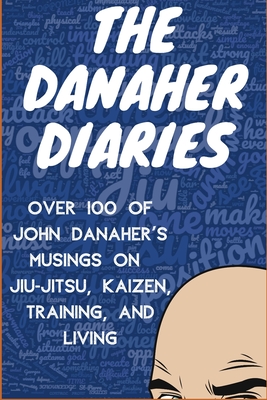 Since he burst onto the scene as George St. Pierre's grappling coach in the late 2000's, John Danaher has risen to be recognized as the foremost mind in Brazilian Jiu-Jitsu and competitive grappling.

More than just a coach, Danaher has garnered a reputation as a philosopher of the art. His social media is read by hundreds of thousands, serving as daily inspiration for students around the world. Danaher is able to take the complex and often contradictory rules of jiu-jitsu and break them down into universal concepts.

And it's not just talk: the infamous "Danaher Death Squad" is a who's who of combat sports. From MMA champions like George St. Pierre to grappling phenoms like Gordon Ryan and Gary Tonon. His work speaks for itself.

We've assembled John Danaher's most timeless and thought provoking writings, over one hundred passages in short segments. At just a few minutes per passage, they make for the perfect quick read before hitting the gym, a quiet moment during morning coffee, or a long afternoon read.

Included are Danaher's famous concepts of:

Scattered throughout are fascinating little stories of John's life, from a philosophy major in college, to a bouncer in New York City. It's and amazing glimpse into the thinking of a modern jiu-jitsu master.