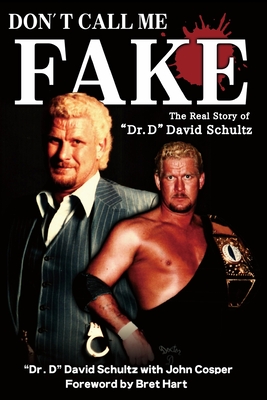 "Dave has always been my friend, and he has always been one of my heroes too. He could walk that walk and talk that talk. David Schultz was a man's man. As fearless as he was dangerous, yet one of the most honorable wrestlers the wrestling business ever knew." - Bret "Hitman" Hart, Two-time WWE Hall of FamerAsk anyone who watched wrestling in the early 80s who the most dangerous man in wrestling was and they will tell you it was Dr. D. Trained by Herb Welch, the Tennessee native terrorized fans in Tennessee, Memphis, Florida, Calgary, Japan and Minnesota before being recruited into the WWF at the request of Hulk Hogan. Dr. D was a singles and tag team champion for multiple promotions, and he faced some of the most dangerous men in the business: Antonio Inoki, Abdullah the Butcher, Bruiser Brody, and Johnny Rodz. Yet he is remembered to this day for taking down a very different opponent: ABC reporter John Stossel, who dared to utter the words, "I think this is fake." While the Stossel incident precipitated the end of his wrestling career, but it's hardly the end of the story. Dr. D turned babyface in real life, finding an even greater calling as a professional bounty hunter. Working out of Connecticut, Dr. D traveled the world and brought back hundreds of "skips" who had fled from justice. Dr. D tracked fugitives from New York to California to Puerto Rico and even Egypt with a 100% capture rate. If he couldn't coax you into coming back of your own free will, he still possessed the skills taught by Herb Welch that could turn even the biggest thug into a crybaby. Call him a wrestler. Call him a bounty hunter. Just don't call him fake Dr. D David Schultz is the real deal, a hero in the wrestling locker room who became an even greater hero in his post wrestling career, clearing the streets of dangerous men and women with his Southern charm and a shooter's grip.