That Used to Be Us: How America Fell Behind in the World It Invented and How We Can Come Back (Paperback) 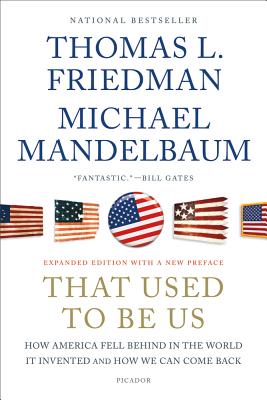 In That Used to Be Us, Thomas L. Friedman and Michael Mandelbaum analyze the four major challenges we face as a country---globalization, the revolution in information technology, chronic deficits, and our pattern of energy consumption---and spell out what we need to do now to preserve American power in the world. The end of the Cold War blinded the nation to the need to address these issues seriously, and China's educational successes, industrial might, and technological prowess in many ways remind us of a time when "that used to be us." But Friedman and Mandelbaum show how America's history, when properly understood, offers a five-part formula for prosperity that will enable us to cope successfully with the challenges we face. That Used to Be Us is both a searching exploration of the American condition today and a rousing manifesto for American renewal.

Thomas L. Friedman is an internationally renowned author, reporter, and columnist-the recipient of three Pulitzer Prizes and the author of six bestselling books, among them From Beirut to Jerusalem and The World Is Flat.

He was born in Minneapolis in 1953, and grew up in the middle-class Minneapolis suburb of St. Louis Park. He graduated from Brandeis University in 1975 with a degree in Mediterranean studies, attended St. Antony's College, Oxford, on a Marshall Scholarship, and received an M.Phil. degree in modern Middle East studies from Oxford. After three years with United Press International, he joined The New York Times, where he has worked ever since as a reporter, correspondent, bureau chief, and columnist. At the Times, he has won three Pulitzer Prizes: in 1983 for international reporting (from Lebanon), in 1988 for international reporting (from Israel), and in 2002 for his columns after the September 11th attacks.

Friedman's first book, From Beirut to Jerusalem, won the National Book Award in 1989. His second book, The Lexus and the Olive Tree: Understanding Globalization (1999), won the Overseas Press Club Award for best book on foreign policy in 2000. In 2002 FSG published a collection of his Pulitzer Prize-winning columns, along with a diary he kept after 9/11, as Longitudes and Attitudes: Exploring the World After September 11. His fourth book, The World Is Flat: A Brief History of the Twenty-first Century (2005) became a #1 New York Times bestseller and received the inaugural Financial Times/Goldman Sachs Business Book of the Year Award in November 2005. A revised and expanded edition was published in hardcover in 2006 and in 2007. The World Is Flat has sold more than 4 million copies in thirty-seven languages.

In 2008 he brought out Hot, Flat, and Crowded, which was published in a revised edition a year later. His sixth book, That Used to Be Us: How American Fell Behind in the World We Invented and How We Can Come Back, co-written with Michael Mandelbaum, was published in 2011.

Thomas L. Friedman lives in Bethesda, Maryland, with his family.

Michael Mandelbaum is the Christian A. Herter Professor of American Foreign Policy at The Johns Hopkins University School of Advanced International Studies in Washington, D.C., where he is also the chairman of the Department of American Foreign Policy. Before joining Johns Hopkins in 1990, Professor Mandelbaum taught at Harvard University, Columbia University and at the United States Naval Academy. He also has taught business executives at the Wharton Advanced Management Program in the Aresty Institute of Executive Education at the Wharton School of Business at the University of Pennsylvania.

Mandelbaum is the author of 10 books and the editor of 12 more. Foreign Policy magazine named him one of the "Top 100 Global Thinkers" of 2010.

His first book, The Nuclear Question: The United States and Nuclear Weapons, was published in 1979. The Economist called it “an excellent history of American nuclear policy...a clear, readable book.”

Mandelbaum spent a year in the State Department in Washington from 1982-1983 on a Council on Foreign Relations International Affairs Fellowship in the office of Under Secretary of State Lawrence S. Eagleburger, working on security issues.

After publishing three books on nuclear weapons issues, The Nuclear Question (1979), The Nuclear Revolution (1981) and The Nuclear Future (1983), Mandelbaum shifted his focus to the relationship between the Soviet Union and the United States, co-writing two books on the subject, Reagan and Gorbachev (1987) and The Global Rivals (1988), which was made into a Public Broadcasting series with Bernard Kalb as the host. In 1986 he became a Senior Fellow at the Council on Foreign Relations in New York, where he also was the director of the Council’s Project on East-West Relations. In this role, which continued for 17 years until 2003, Mandelbaum became a frequent guest on television and radio, discussing such major issues as the arms race, the fall of the Soviet Union, the war in Iraq and the implications of globalization. He has appeared on The CBS Evening News, The News Hour, Face the Nation, Larry King Live and The Charlie Rose Show, among many other programs.

From 1985-2005 Mandelbaum wrote a regular foreign affairs analysis column for Newsday. His Op-Ed pieces on foreign affairs have also appeared in The New York Times, The Wall Street Journal, The Washington Post, The Los Angeles Times, and have been republished in newspapers around the world.

In addition to his newspaper columns, Mandelbaum has written many longer articles for TIME Magazine, as well as the journal, Foreign Affairs, including his provocative 1996 essay entitled “Foreign Policy as Social Work” (about the foreign policy of the Clinton administration), followed two years later by “A Perfect Failure” about the war in Kosovo.

In 1988 Mandelbaum published one of his major books, The Fate of Nations: The Search for National Security in the 19th and 20th Centuries, which the American Historical Review called "a tour de force." It is a survey of how a select number of countries have dealt with their security concerns in the modern era. Publishers Weekly called it "brilliant and enjoyable.... [Mandelbaum's] knowledge of philosophy, politics, history and economics results in a stunning delineation of centuries of military actions, political maneuverings and cultural uprisings." The World Affairs Councils of America named him one of the most influential people in American foreign policy.

Mandelbaum’s 1996 book, The Dawn of Peace in Europe, received a rave review in The New York Times Book Review, which called it “a brilliant book...the most lucid exposition yet of the post-Cold War order in Europe.” It was in this book that he introduced readers to the idea that Europe has become a “zone of warlessness” — a region in which armies are kept small and defense budgets modest because the people and their governments have been able to resolve their differences peacefully through such organizations as the European Union rather than, as in the past, on the field of battle.

In 2002 Mandelbaum published The Ideas That Conquered the World: Peace, Democracy and Free Markets in the Twenty-first Century, which became an instant classic on the major international themes of the new millennium and has been translated into seven languages, including Chinese and Arabic.

In 2004 he took time out from his usual focus on international relations to write The Meaning of Sports: Why Americans Watch Baseball, Football and Basketball and What They See When They Do, which analyzes the appeal of team sports in the United States and compares the workings of sports teams to the cooperation necessary in business enterprise. Pete Hamill in The New York Times described the book as "a subtle extension of Mandelbaum's own expertise in foreign policy. It can help explain the United States to the rest of the often-baffled world.”

In 2006 Mandelbaum returned to the international arena with The Case For Goliath: How America Acts as the World’s Government in the 21st Century. It is a provocative, eye-opening look at America’s global role, the responsibilities it has undertaken, and the challenges it faces. The New York Review of Books described it as “an eloquent statement of the vital role of America in twenty-first-century global security.”

Democracy's Good Name: The Rise and Risks of the World's Most Popular Form of Government, published in 2007, was hailed by The Weekly Standard as "an excellent and broadly accessible book.... Mandelbaum stresses the role of free markets, which provide not only economic growth but also a school in the qualities that liberal democracy depends on." His book The Frugal Superpower: America's Global Leadership in a Cash-Strapped Era was released in August of 2010.

Mandelbaum was the Whitney H. Shepardson Fellow of the Council on Foreign Relations from 1999-2000 and a Carnegie Scholar (in 2004-2005) of the Carnegie Corporation of New York. These fellowships supported the writing of his two most recent foreign policy books.

From 1984-2005 he was the associate director of the Aspen Institute’s Congressional Program on Relations With the Former Communist World, which organized seminars for members of Congress to educate them on the issues facing the United States in its relations with the countries of central and eastern Europe, particularly Russia. In this role he has traveled throughout Russia and Eastern Europe and has met regularly with the members of Congress who take the lead on foreign policy issues, as well as with their counterparts in both western and eastern European legislatures. This has deepened his understanding of the perspectives of American House and Senate members as well as the responsibilities and constraints on many foreign legislators. He also has testified before the Congressional committees and subcommittees with responsibilities for foreign relations and the armed services.

As a member of the Board of Advisors of the Washington Institute for Near East Policy, Mandelbaum contributes his understanding of the Middle East to this Washington, D.C.-based policy group and has made numerous trips to the region with its leadership.

A popular speaker for the United States Information Agency for more than two decades, Mandelbaum has explained American foreign policy to diverse groups throughout Europe, East Asia, Australia, New Zealand, India and the Middle East. His ability to cut through clichés and misunderstandings have made him a popular lecturer. He lectures widel

“At once enlightened and enlightening...[American society] could use more of the generous responsible spirit Friedman and Mandelbaum recommend.” —The New York Times Book Review

“Thoroughly researched and passionately argued...That Used to Be Us is an important contribution to an intensifying debate, and it deserves the widest possible attention....Compelling.” —The New York Times

“Anyone who cares about America's future---anyone planning to vote in 2012---ought to read this book and hear the authors' compelling case.” —The Christian Science Monitor

“An important and eminently readable book.” —The New York Review of Books

“Touches a nerve...In a country whose politicians are partisan intransigents and whose commentators are more interested in zingers than solutions, it takes courage to be so baldly civic-minded.” —BusinessWeek