Warrior of the Wild (Hardcover) 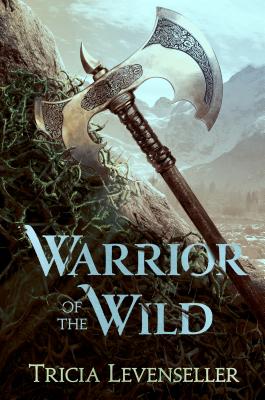 Warrior of the Wild (Hardcover)

An eighteen-year-old chieftain's daughter must find a way to kill her village’s oppressive deity if she ever wants to return home in Warrior of the Wild, the Viking-inspired YA standalone fantasy from Tricia Levenseller, author of Daughter of the Pirate King.

How do you kill a god?

As her father's chosen heir, eighteen-year-old Rasmira has trained her whole life to become a warrior and lead her village. But when her coming-of-age trial is sabotaged and she fails the test, her father banishes her to the monster-filled wilderness with an impossible quest: To win back her honor, she must kill the oppressive god who claims tribute from the villages each year or die trying.

Tricia Levenseller, author of several YA fantasy novels, including Daughter of the Pirate King and The Shadows Between Us, grew up in Oregon, where she spent her childhood climbing trees and playing make believe. She now lives in Utah with her bossy dog, Rosy, where she writes full time. When she’s not writing or reading, Tricia enjoys putting together jigsaw puzzles, playing Overwatch and Sea of Thieves on her Xbox, and finding tasty restaurants to frequent.

"One of my favourite YA books ever. The action! The world-building! The voice! This book kicks so much ass." -- Cale Dietrich, author of The Love Interest

"Levenseller presents a fully rounded portrait of a girl whose strength in battle is tempered by her very human anxieties. Rasmira's quest is thrilling, her emotional journey compelling; this adventure sings." --Booklist

"Levenseller... presents a female warrior who refuses to believe that crying makes one weak and that strength is not feminine. Through Rasmira’s inner monologue, teens will learn that teamwork and friendship are important and that failure makes one strong. This high-octane novel is filled with mythical creatures and showcases a heroine who wants to be a warrior, a woman, and a leader." --School Library Journal

"Witty banter brings levity, and of course Rasmira finds romance with one of the boys, but the real gratification lies in Rasmira’s transformation from broken, betrayed, girl to resourceful, confident victor. Her final clash with the god is heart pounding, and her triumph in front of her village and father is satisfyingly righteous." -- The Bulletin for the Center for Children's Books

Praise for Tricia Levenseller:
"Levenseller has created a formidable female character who can take care of herself as she makes some hard decisions.” —School Library Journal on Daughter of a Pirate King

“[Levenseller’s] words will pull you in, and there's no escaping them." —Charlie N. Holmberg, author of The Paper Magician Series, on Daughter of the Siren Queen

“With a cunning plot, robust writing, and complicated characters, any reader will enjoy being manipulated in Levenseller's capable hands.” —Anna Banks, author of the New York Times Bestseller Of Triton, on Daughter of the Pirate King