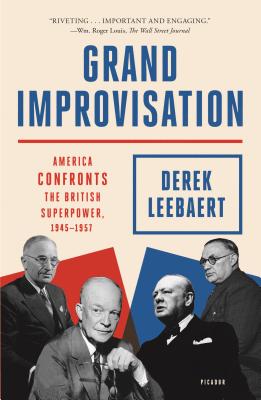 A new understanding of the post World War II era, showing what occurred when the British Empire wouldn’t step aside for the rising American superpower—with global insights for today.

An enduring myth of the twentieth century is that the United States rapidly became a superpower in the years after World War II, when the British Empire—the greatest in history—was too wounded to maintain a global presence. In fact, Derek Leebaert argues in Grand Improvisation, the idea that a traditionally insular United States suddenly transformed itself into the leader of the free world is illusory, as is the notion that the British colossus was compelled to retreat. The United States and the U.K. had a dozen abrasive years until Washington issued a “declaration of independence” from British influence. Only then did America explicitly assume leadership of the world order just taking shape.

Leebaert’s character-driven narrative shows such figures as Churchill, Truman, Eisenhower, and Kennan in an entirely new light, while unveiling players of at least equal weight on pivotal events. Little unfolded as historians believe: the Truman Doctrine and the Marshall Plan; the Korean War; America’s descent into Vietnam. Instead, we see nonstop U.S. improvisation until America finally lost all caution and embraced obligations worldwide, a burden we bear today.

Understanding all of this properly is vital to understanding the rise and fall of superpowers, why we’re now skeptical of commitments overseas, how the Middle East plunged into disorder, why Europe is fracturing, what China intends—and the ongoing perils to the U.S. world role.

Derek Leebaert is the author of Magic and Mayhem: The Delusions of American Foreign Policy, The Fifty-Year Wound: How America’s Cold War Victory Shapes Our World, and To Dare and to Conquer: Special Operations and the Destiny of Nations, and the coauthor of the MIT Press’s trilogy on the information technology revolution. He has led a global management consulting firm for the last fifteen years and serves on the board of Providence Health System and other public service institutions. He is a former Smithsonian Fellow and professor at Georgetown University, and a founding editor of three enduring periodicals: the Harvard/MIT quarterly International Security, the Journal of Policy Analysis and Management, and, for investors and central bankers, The International Economy. Leebaert is also a founder of the National Museum of the United States Army. He lives in Connecticut and Washington, D.C.

"Riveting . . . Important and engaging . . . Mr. Leebaert . . . emphasizes bitter controversies and disagreements between Britain and America . . . yet in the first half of the book, he argues also that a close relationship existed between two near-heroic figures... Dean Acheson [and] Ernest Bevin, the British foreign secretary, . . . a man of moral integrity with an all-embracing intellect bordering on genius . . . In the second half of the book, there are no heroes." —Wm. Roger Louis, The Wall Street Journal

"Leebaert's fascinating book is far from just another story of the British empire's recessional . . . Leebaert's argument is that, despite the challenges, in the immediate postwar period, Britain was ready, willing and indeed for a time even able to play the role of . . . global superpower alongside America . . . there's no shortage of vivid accounts of some of the key characters." —Gerard Baker, The Times (London)

"Full of vignettes and insights about America’s great Oedipal moment, when the little republic grew up and pushed [the UK] aside . . . Leebaert argues persuasively that conventional accounts of the postwar era skip over the crucial, vertiginous moment when Britain was less exhausted than is commonly assumed and the American position was far less assured." —Robert F. Worth, The New York Review of Books

"Smoothly written and well-sourced . . . This excellent history reflects the quality of the scholarship that Leebaert displayed in his remarkable work The Fifty Year Wound. Recommended for all collections." —Library Journal (starred)

"A decidedly revisionist narrative brings neglected figures to the forefront while critically reassessing others . . Leebaert’s . . . account puts a different spin on American and British history with an eye to current policy challenges. Besides showing the difficulties of managing empire—especially without professional diplomats and civil servants relying on practical experience rather than academic training—it makes a persuasive case for offshore balancing as a strategy." —William Anthony Hay, The National Interest

"[Leebaert's] reconstruction of events from 1945 to 1957 . . . draws impressively on many original sources . . . Britain was not the 97-pound weakling of the Charles Atlas muscle-building craze of the time . . . he stresses the countervailing points that made Britain an effective international partner, stiffening a 'jittery' America in looming collisions with the Soviet Union." —Sir Harold Evans, New York Times Book Review

"Leebaert’s history of the U.S.-British relationship from V-E Day to the aftermath of the 1956 Suez crisis . . . attacks the widespread view that the immediate postwar period saw a smooth handoff of world power from London to Washington . . . he is right to challenge the narrative of a seamless transition—and right, too, that a sentimentalized vision of this history will make it harder for policymakers to deal with the enormous challenges facing the United States in the twenty-first century." —Walter Russell Mead, Foreign Affairs

"A sturdy exploration of lesser-known aspects of the Cold War, focusing on the rivalry between allies as much as enemies." —Kirkus

"Grand Improvisation is an elegant work of revisionism that relies on documentary evidence to relentlessly advance its case. The author’s eye for detail, stylistic verve and command of archival records from two continents set him apart from other historians . . . Leebaert’s magisterial book proves that there is still much to learn from [ . . . ] early episodes of the Cold War." —Ray Takeyh, Survival: Global Politics and Strategy

“A nation in decline that persists in imagining itself indispensable is a menace to itself and to others. So it was with Great Britain after World War II. So too it is with the United States today. With sparkling prose and deft characterizations, Derek Leebaert examines the relationship between those two countries—the one on the way down, the other reaching its zenith—in the first decade of the postwar era. The result is both revealing and immensely instructive. This is historical revisionism of the very best sort.” —Andrew J. Bacevich, author of America’s War for the Greater Middle East: A Military History

“Derek Leebaert is a Cold War historian of the first rank as well as a spellbinding narrator. But his greatest virtue as a scholar and author is a dogged pursuit of what really happened even, or especially, when it contradicts conventional wisdom. Reading this account of how reluctant the British were to relinquish—and Americans to assume—world power after 1945, I found myself nodding repeatedly: ‘Yes, this rings totally true . . . and the endnotes confirm it.’ The foreign policy implications of Grand Improvisation are enormous even today.” —Walter A. McDougall, Pulitzer Prize–winning historian, University of Pennsylvania

“Grand Improvisation is a fascinating and provocative account of Anglo-American relations after the Second World War, rich with revealing details, anecdotes and brilliantly wrought portraits of the key personalities. Lively and entertaining, this book will change the way we look at the immediate post-war years and carries profound lessons for the world today as power once again shifts across the globe.” —Liaquat Ahamed, author of the Pulitzer-prize winning Lords of Finance