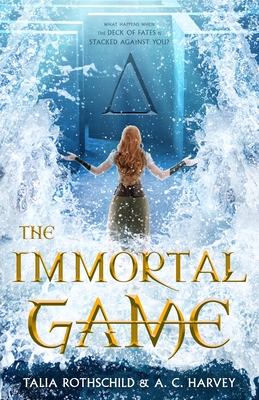 By Talia Rothschild, A. C. Harvey

An exiled goddess goes on a quest to clear her name and save Mount Olympus in Talia Rothschild & A C Harvey's action-packed young adult debut, The Immortal Game!

Galene, daughter of Poseidon, desperately wants to earn her place among the gods. But when a violent attack leaves Mount Olympus in chaos and ruins, she is accused of the crime. Banished from Olympus, Galene sets out to prove her innocence and discovers a more deadly plot—one that threatens even the oldest of Immortals.

Fortunately, she has allies who willingly join her in exile:

A lifelong friend who commands the wind.
A defiant warrior with deadly skill.
A fire-wielder with a hero’s heart.
A mastermind who plays life like a game.

All-out war is knocking at the gates. Galene and her friends are the only ones who can tip the scales toward justice, but their choices could save Olympus from total annihilation, or be the doom of them all.

Talia Rothschild, Italian American, grew up in both tropical Florida and mountainous Utah. She’s passionate about stories in many forms—music, dance, photography, film and, of course, great novels. When she’s not happily writing, she fulfills her other dreams by mothering the sweetest baby girl and making memories with her husband. The Immortal Game, co-authored with her dear friend Ashleigh, is her debut novel.

A. C. Harvey is teaching high school physics and bringing her writing dreams to life. English-born and world-traveled, she loves filling her life with new adventures, such as visiting a new country or exploring the Wild West with her husband. She also finds escape in movies, literature, music, and yearly comic conventions. The Immortal Game is her debut novel, created alongside Talia Rothschild, her close friend.

"A lively, thrilling adventure with stakes higher than a Colossus and a band of characters with a bond mightier than Mount Olympus. A true joy for mavens of Ancient Greece mythos." -- Emily R. King, author of the Hundredth Queen series

"An epic voyage full of monsters, battles, danger, and magic. Readers will be swept up in this action-packed adventure of the gods that will pit friend against friend, family against family, and love against love. " --Steven Bohls, co-author of Lux