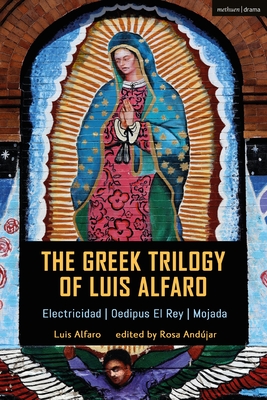 The Greek Trilogy of Luis Alfaro gathers together for the first time the three 'Greek' plays of the MacArthur Genius Award-winning Chicanx playwright and performance artist.

Based respectively on Sophocles' Electra and Oedipus, and Euripides' Medea, Alfaro's Electricidad, Oedipus El Rey, and Mojada transplant ancient themes and problems into the 21st century streets of Los Angeles and New York, in order to give voice to the concerns of the Chicanx and wider Latinx communities. From performances around the world including sold-out runs at New York's Public Theater, these texts are extremely important to those studying classical reception, Greek theatre and Chicanx writers. This unique anthology features definitive editions of all three plays alongside a comprehensive introduction which provides a critical overview of Luis Alfaro's work, accentuating not only the unique nature of these three 'urban' adaptations of ancient Greek tragedy but also the manner in which they address present-day Chicanx and Latinx socio-political realities across the United States. A brief introduction to each play and its overall themes precedes the text of the drama. The anthology concludes with exclusive supplementary material aimed at enhancing understanding of Alfaro's plays: a 'Performance History' timeline outlining the performance history of the plays; an alphabetical 'Glossary' explaining the most common terms in Spanish and Spanglish appearing in each play; and a 'Further Reading' list providing primary and secondary bibliography for each play. The anthology is completed by a new interview with Alfaro which addresses key topics such as Alfaro's engagement with ancient Greek drama and his work with Chicanx communities across the United States, thus providing a critical contextualisation of these critically-acclaimed plays.