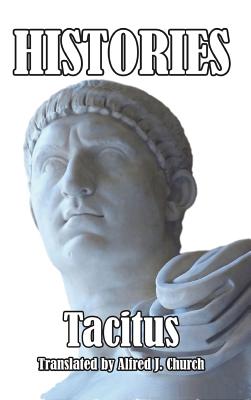 Translated by Alfred J. Church. A new edition of the famous 100 AD work by Roman historian Publius Cornelius Tacitus which describes the one year period of anarchy in Rome from 69 to 70 AD, which saw four emperors-Galba, Otho, Vitellius, and Vespasian-engage in a murderous civil war for the throne of the Roman Empire. Included in this fast-paced adventure is Tacitus's equally famous survey of the Jews, the first written by an official Roman historian, penned as it was just after the Roman-Jewish war of AD 68-73. The Histories start after the downfall of Nero in favor of the governor of Hispania, General Servius Sulpicius Galba. Galba ruled for only seven months until challenged-and killed-by rebels under the governor of the province of Lusitania, Marcus Salvius Otho, in a bloody fight carried out in the Forum in Rome. Otho's reign lasted only three months. Challenged by Aulus Vitellius, the commander of the legions on the lower Rhine River, Otho's forces were defeated and he committed suicide. Vitellius reigned for eight months until his claim to the throne was challenged by Titus Flavius Caesar Vespasianus (Vespasian), commander of the Roman legions in Egypt and Judaea, who had been declared emperor by his own troops. Defeated in battle, Vitellius abdicated, but was executed in Rome by Vespasian's soldiers. Vespasian went on to finish the war against the Jews (through his son Titus) and was responsible for building the Coliseum in Rome and establishing the Flavian dynasty. Tactitus's work originally consisted of fourteen books, of which only five have survived. Prominent throughout are his insights that Roman society was already overrun with non-Roman slaves, that the best units in the Roman army were Germans, and that the Jews in his words, "regard the rest of mankind with all the hatred of enemies.