Faith and Betrayal: A Pioneer Woman's Passage in the American West (Paperback) 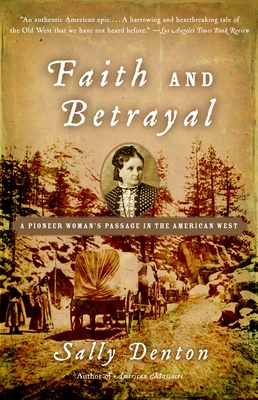 In the 1850s, Jean Rio, a deeply spiritual widow, was moved by the promises of Mormon missionaries and set out from England for Utah. Traveling across the Atlantic by steamer, up the Mississippi by riverboat, and westward by wagon, Rio kept a detailed diary of her extraordinary journey.In Faith and Betrayal, Sally Denton, an award-winning journalist and Rio’s great-great-granddaughter, uses the long-lost diary to re-create Rio’s experience. While she marvels at the great natural beauty of Utah, Rio’s enthusiasm for her new life turns to disillusionment over Mormon polygamy and violence against nonbelievers, as well as the harshness of frontier life. She sets out for California, where she finds a new religion and the freedom she longed for. Unusually intimate and full of vivid detail, this is an absorbing story of a quintessential American pioneer.

Sally Denton is the author of American Massacre: The Tragedy at Mountain Meadows, September 1857; The Bluegrass Conspiracy: An Inside Story of Power, Greed, Drugs, and Murder; and, with Roger Morris, The Money and the Power: The Making of Las Vegas and Its Hold on America, 1947--2000. She received Western Heritage Awards in 2002 and 2004, a Lannan Literary grant in 2000, and, for her body of work, the Nevada Silver Pen Award of 2003 for distinguished literary achievement. Her award-winning investigative reporting has appeared in the New York Times, the Washington Post, and American Heritage. She lives with her three children in New Mexico.

“An authentic American epic. . . . A harrowing and heartbreaking tale of the Old West that we have not heard before.” –Los Angeles Times Book Review

“Rich in the history of the time and redolent with strong personalities, Sally Denton’s newest book is a compelling look at a slice of America through the lens of an unlikely pioneer.” –Santa Fe Journal

“As taut as a mytery and as lucid as journalism, Faith and Betrayal is both intimate and epic.”–The New Mexican