Driving with the Devil: Southern Moonshine, Detroit Wheels, and the Birth of NASCAR (Paperback) 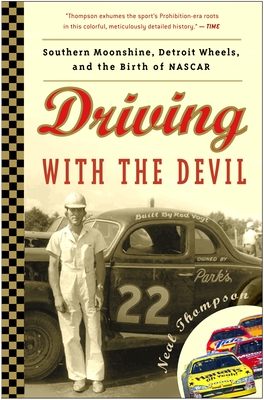 “Moonshiners put more time, energy, thought, and love into their cars than any racer ever will. Lose on the track and you go home. Lose with a load of whiskey and you go to jail.” —Junior Johnson, NASCAR legend and one-time whiskey runner

Today’s NASCAR is a family sport with 75 million loyal fans, which is growing bigger and more mainstream by the day. Part Disney, part Vegas, part Barnum & Bailey, NASCAR is also a multibillion-dollar business and a cultural phenomenon that transcends geography, class, and gender. But dark secrets lurk in NASCAR’s past.

Driving with the Devil uncovers for the first time the true story behind NASCAR’s distant, moonshine-fueled origins and paints a rich portrait of the colorful men who created it. Long before the sport of stock-car racing even existed, young men in the rural, Depression-wracked South had figured out that cars and speed were tickets to a better life. With few options beyond the farm or factory, the best chance of escape was running moonshine. Bootlegging offered speed, adventure, and wads of cash—if the drivers survived. Driving with the Devil is the story of bootleggers whose empires grew during Prohibition and continued to thrive well after Repeal, and of drivers who thundered down dusty back roads with moonshine deliveries, deftly outrunning federal agents. The car of choice was the Ford V-8, the hottest car of the 1930s, and ace mechanics tinkered with them until they could fly across mountain roads at 100 miles an hour.

After fighting in World War II, moonshiners transferred their skills to the rough, red-dirt racetracks of Dixie, and a national sport was born. In this dynamic era (1930s and ’40s), three men with a passion for Ford V-8s—convicted criminal Ray Parks, foul-mouthed mechanic Red Vogt, and crippled war veteran Red Byron, NASCAR’s first champion—emerged as the first stock car “team.” Theirs is the violent, poignant story of how moonshine and fast cars merged to create a new sport for the South to call its own.

Driving with the Devil is a fascinating look at the well-hidden historical connection between whiskey running and stock-car racing. NASCAR histories will tell you who led every lap of every race since the first official race in 1948. Driving with the Devil goes deeper to bring you the excitement, passion, crime, and death-defying feats of the wild, early days that NASCAR has carefully hidden from public view. In the tradition of Laura Hillenbrand’s Seabiscuit, this tale not only reveals a bygone era of a beloved sport, but also the character of the country at a moment in time.

Neal Thompson is a veteran journalist who has worked for the Baltimore Sun, Philadelphia Inquirer, and St. Petersburg Times, and whose magazine stories have appeared in Outside, Esquire, Backpacker, and Men’s Health. He teaches at the University of North Carolina-Asheville’s Great Smokies Writing Program and is author of Light This Candle: The Life & Times of Alan Shepard, America’s First Spaceman. Thompson, his wife, and their two sons live in the mountains outside Asheville, North Carolina.

“Here’s the real story, not just of NASCAR, but of the new South that emerged from moonshine and speed.”
—Richard Ben Cramer, author of Joe DiMaggio: The Hero’s Life and editor of The Best American Sports Writing 2004

“Neal Thompson has written NASCAR’s Glory of Their Times. He tells the true story of NASCAR’s beginnings, revealing the sport’s strong whiskey roots and letting us get to know its key movers and shakers, including the triumvirate of racer Red Byron, mechanic Red Vogt, and bootlegger car owner Raymond Parks. Like Seabiscuit, Thompson makes a sport and an era come wonderfully alive.”
—Peter Golenbock, author of Miracle: Bobby Allison and the Saga of the Alabama Gang and American Zoom: Stock Car Racing—From Dirt Tracks to Daytona

“Driving with the Devil is a full-tilt excursion through the back roads of NASCAR’s past, when moonshiners and scofflaws pioneered the sport. This is a tale that sanitized corporate NASCAR would rather forget about, but with Neal Thompson at the wheel, it makes for wonderful reading.”
—Sharyn McCrumb, author of St. Dale

“Driving with the Devil is a treasure trove of historically relevant information that tracks the history of the American automobile industry, the culture and morality of the broader society, and the motivations and personalities of early stock-car-racing operatives. All of which have inexorably contributed to the foundation and fabric of NASCAR’s brand of stock-car racing as it manifests itself today.”
—Jack Roush, chairman of Roush Racing

“Driving with the Devil is a most impressive piece of work. Most Americans have the vague notion that big-time stock-car racing sprang from moonshine-hauling in the southern Appalachians prior to the Second World War, but here is documented proof that it was that and much more. Neal Thompson’s Driving with the Devil nails it once and for all: a riveting report any student of Americana will cherish. It’s no more about racing than The Old Man and the Sea is about fishing.”
—Paul Hemphill, author of Lovesick Blues: The Life of Hank Williams and Wheels: A Season on NASCAR’s Winston Cup Circuit

"There are more divorces, drunks and wrecks than you can shake a checkered flag at...A thoroughly researched account of a 'simpler time' in a sport that has since become a multi-billion dollar business."
–NBC News anchor Brian Williams, in the Wall Street Journal