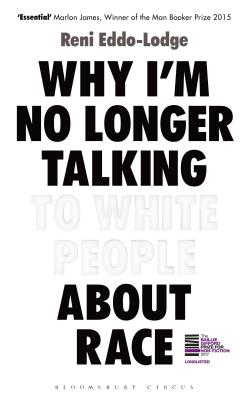 "This is a book that was begging to be written . . . Essential." --Marlon James

"The most important book for me this year." --Emma Watson

"One of the most important books of 2017." --Nikesh Shukla, editor of The Good Immigrant


In 2014, award-winning journalist Reni Eddo-Lodge wrote about her frustration with the way that discussions of race and racism in Britain were being led by those who weren’t affected by it. She posted a piece on her blog, entitled: "Why I’m No Longer Talking to White People About Race."

Her words hit a nerve. The post went viral and comments flooded in from others desperate to speak up about their own experiences. Galvanized by this clear hunger for open discussion, she decided to dig into the source of these feelings. Exploring issues from eradicated black history to the political purpose of white dominance, whitewashed feminism to the inextricable link between class and race, Reni Eddo-Lodge offers a timely and essential new framework for how to see, acknowledge and counter racism. It is a searing, illuminating, absolutely necessary exploration of what it is to be a person of color in Britain today.

Reni Eddo-Lodge is a London-based, award-winning journalist. She has written for the New York Times, the Voice, Daily Telegraph, Guardian, Independent, Stylist, Inside Housing, the Pool, Dazed and Confused, and the New Humanist. She is the winner of an MHP 30 to Watch Award and was chosen as one of the Top 30 Young People in Digital Media by the Guardian in 2014. She has also been listed in Elle’s 100 Inspirational Women list, and The Root’s 30 Black Viral Voices Under 30. She contributed to The Good Immigrant. Why I’m No Longer Talking to White People about Race is her first book. It was chosen as Blackwell’s Non-Fiction Book of the Year, longlisted for the Baillie Gifford Prize and shortlisted for the Books Are My Bag Readers Award for Non-Fiction.

"This is a book that was begging to be written. This is the kind of book that demands a future where we’ll no longer need such a book. Essential." - Marlon James, author of Man Booker Prize-winning A BRIEF HISTORY OF SEVEN KILLINGS

"This political, accessible and uncompromising book has got people talking about race and racism in Britain." - Guardian, "Books of the Year"

"Searing ... A fresh perspective, offering an Anglocentric alternative to the recent status-quo-challenging successes of Get Out and Dear White People. This book’s probing analysis and sharp wit certainly make us pray she will continue talking to white people about race." - Harper's Bazaar

"A clear and convincing dissection of racism and the white denial that perpetuates it." - Our Best Adult Books of 2017 – Nonfiction, starred review, Shelf Awareness

"A plainspoken, hard-hitting take on mainstream British society's avoidance of race and the complexities and manifestations of racism . . . Eddo-Lodge's crisp prose and impassioned voice implore white Britain to look beyond obvious racism to acknowledge the more opaque existence of structural racism . . . With this thoughtful and direct book, Eddo-Lodge stokes the very conversation that the title rejects." - Publishers Weekly

"In her probing and personal narrative, Eddo-Lodge offers fresh insight into the way all racism is ultimately a 'white problem' that must be addressed by commitment to action, no matter how small . . . A sharp, compelling, and impassioned book." - Kirkus Reviews

"The provocative title is hard to ignore, and so is the book's cover. Seen from afar, it appears to be called Why I'm No Longer Talking About Race,which is intriguing enough on its own. You have to look closer to see To White People hiding underneath it in debossed letters. It's a striking visual representation of white people's blindness to everyday, structural racism . . . It's that boldness, that straight talk which makes this book memorable. Eddo-Lodge pushes readers to recognize that racism is a systemic problem that needs to be tackled by those who run the system" - NPR.org

"You don't have to live in the U.K. to recognize the issues of white privilege, class, feminism and structural racism that [Eddo-Lodge] explores in this essential book." - Silvia Viñas, NPR

"Why I'm No Longer Talking to White People about Race by Reni Eddo-Lodge is a timely and sparky discussion about a vital subject." - Times Literary Supplement, "Books of the Year"

"Her work, which began as a silent scream against white complicity to racism, has shifted the conversation in the U.K. . . . Though she may not be talking to white people about race, she has gotten a lot of people to listen." - Time Magazine

"Reni Eddo-Lodge is that rarest of delights--a young, working-class black woman from Tottenham with a voice in public life ... This book is a real eye-opener when it comes to Britain’s hidden history of discrimination ... A book like this matters now." - Refinery29

"Eddo-Lodge explores the nuanced ways in which racial prejudice continues and is ignored." - Vogue

"A book that's set to blow apart the understanding of race relations in this country." - Stylist

"I found Why I'm No Longer Talking to White People about Race by Reni Eddo-Lodge timely and resonant. The author's passages on intersectionality are particularly poignant. It's a powerful and important read, relevant and accessible whatever your race." - Observer, "Books of the Year"

"Thought-provoking (and deeply uncomfortable) ... What Eddo-Lodge does is to force her readers to confront their own complicity ... Her books is a call to action ... What makes the book radical is the way it shifts the burden of ending racism on to white people." - Sunday Herald

"Why I’m No Longer Talking To White People About Race . . . look[s] at racial dynamics in the UK, and does so with intelligence and poignance. Eddo-Lodge's journalism background makes the book the perfect mixture of fact and opinion, resulting in a book that will probably teach you a lot about Britain’s racist history." - Cultured Vultures, "10 Best Books of 2017"

"Eddo-Lodge is digesting history for those white readers who have had their ears and eyes shut to the violence in Britain’s past ... An important shift that undermines the idea that racism is the BAME community’s burden to carry. The liberation that this book offers is in the reversal of responsibilities." - Arifa Akbar, Financial Times

"It’s deep, it's important and I suggest taking a deep breath, delving in and I promise you will come up for air woke and better equipped to understand the underlying issues of race in our society." - Sharmaine Lovegrove, ELLE

"Daring, interrogatory, illuminating. A forensic dissection of race in the UK from one of the country's most critical young thinkers. Reni's penetrative voice is like a punch to the jugular. Read it, then tell everyone you know." - Irenosen Okojie, author of BUTTERFLY FISH

"One of the most important books of 2017." - Nikesh Shukla, editor of THE GOOD IMMIGRANT

"I’ve never been so excited about a book. Thank God somebody finally wrote it ... Blistering ... Absolutely vital writing from one of the most exciting voices in British politics. A stunningly important debut ... Fellow white people: It’s our responsibility as to read this book ... This book is essential reading for anyone even remotely interested in living in a fairer, kinder and more equal world." - Paris Lees

"Laying bare the mechanisms by which we internalise the assumptions, false narratives and skewed perceptions that perpetuate racism, Eddo-Lodge enables readers of every ethnicity to look at life with clearer eyes. A powerful, compelling and urgent read." - Ann Morgan, author of A YEAR OF READING THE WORLD

"Why I'm No Longer Talking to White People About Race’ has a very special and very real relevance to race relations in the United States and throughout Europe. Exceptionally well presented, impressively informed, thoughtful and thought-provoking" - Midwest Book Review

"Throughout her collection Eddo-Lodge discusses class, race, gender and privilege, through the framework of British culture and history. But whether you’re English or not, the book's exploration of inequality will echo with readers all over the world" - Mashable