A Season on the Mat: Dan Gable and the Pursuit of Perfection (Paperback) 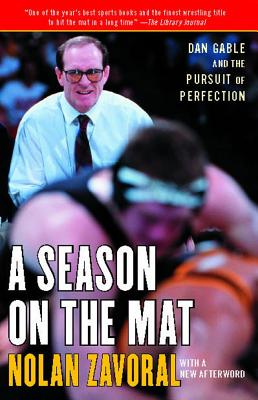 For twenty-one years, Dan Gable's Iowa Hawkeyes dominated wrestling to an extent rarely seen in any sport: twenty-one consecutive Big 10 titles and fifteen national championships. In A Season on the Mat, award-winning reporter Nolan Zavoral explores Iowa's storied wrestling program and Gable's record of excellence in an unprecedented, intimate look at the man and his methods during his final season as a head coach.

A Season on the Mat chronicles the dramatic 1996-97 season, in which Gable led his team -- far from his most talented -- to a record-breaking performance at the national championship, at which it scored the most points in collegiate wrestling history. Zavoral takes the reader behind the scenes into the stifling heat of the wrestling room, where young men from places like Rock Falls, Illinois, or Philip, South Dakota, sacrifice everything they have just to be a part of the Hawkeye program.

From his difficult upbringing, interrupted by the tragedy of his sister's brutal murder, through the single defeat that haunts him to this day, to the ups and downs of his phenomenal coaching career, Gable has come to symbolize to many all that is special about this demanding, elemental sport. Part biography, part chronicle, part portrait of this unique subculture, A Season on the Mat is the best and most thorough look at one of the most important and most overlooked figures in American athletics.

Nolan Zavoral has been a reporter and editor for twenty-five years at newspapers ranging from the lowa City Press-Citizen to USA Today. He is currently a reporter for the Minneapolis Star-Tribune; his stories have appeared in The New York Times, Newsday, and The Washington Post. The author of In the Chutes, he lives in St. Paul, Minnesota.

"Finally, wrestling has a classic to call its own." -- The Patriot-News (Harrisburg, Pennsylvania)

"The ring of truth is unmistakable. . . . Some of the best writing on wrestling since John Irving wrote about 'Gorgeous Dan' for Esquire magazine." -- Des Moines Sunday Register