1 Dead in Attic: After Katrina (Paperback) 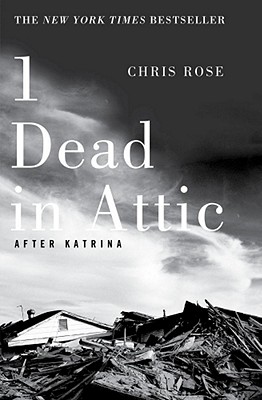 By Chris Rose
Email or call for price.
Hard to Find

Originally a self-published sensation by a Pulitzer Prize-winning author, 1 Dead in Attic captures the heart and soul of New Orleans in the immediate aftermath of Hurricane Katrina.

1 Dead in Attic is a collection of stories by Times-Picayune columnist Chris Rose, recounting the first harrowing year and a half of life in New Orleans after Hurricane Katrina. Celebrated as a local treasure and heaped with national praise, Rose provides a rollercoaster ride of observation, commentary, emotion, tragedy, and even humor—in a way that only he could find in a devastated wasteland.

They are stories of the dead and the living, stories of survivors and believers, stories of hope and despair. And stories about refrigerators.

1 Dead in Attic freeze-frames New Orleans, caught between an old era and a new, during its most desperate time, as it struggles out of the floodwaters and wills itself back to life.

Chris Rose is a columnist for The Times-Picayune in New Orleans, an essayist for The NewsHour with Jim Lehrer, and a frequent commentator for National Public Radio's Morning Edition. In 2006, he was a finalist for the Pulitzer Prize for Distinguished Commentary in recognition of his Katrina columns and was awarded a share in the Times-Picayune staff's Pulitzer for Public Service. Rose lives in New Orleans with his three children.

"These are impressionistic cries of pain and mordant humor...they so aptly mirrored the sense of surreal dislocation experienced by New Orleanians that they turned Rose into a voice of the tortured city."
-- Ken Ringle, The Washington Post Book World

"The most engaging of the Katrina books...packed with more heart, honesty, and wit...Rose was more interested in telling the searing stories of his shattered city than assigning the blame for its demise..."
-- Michael Grunwald, The New Republic