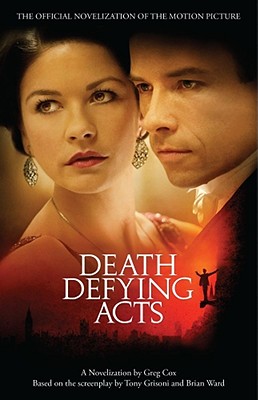 
Email or call for price
It is 1926, and Harry Houdini is the most famous performer in the world. Audiences pack theaters to watch him perform his now-legendary death-defying acts. But despite his fame and fortune, Houdini is a man haunted by his past. Thirteen years ago, his beloved mother passed away, leaving her son tortured with regret that he was not at her side when she died...and did not bear witness to her final words to him. Now driven to the point of obsession, Houdini offers a $10,000 reward to anyone who can contact his mother from beyond the grave and reveal her dying words to him.

Enter Mary McGregor and her young daughter, Benji. Poor and uneducated, they live by their wits in the slums of Edinburgh, with Mary using her feminine wiles and deceptive ways in a psychic act that is part burlesque and part occult. When Mary and Benji learn of Houdini's public offer, they set their sights on the world's greatest illusionist and escape artist as the ultimate score.

But Houdini proves to be not such an easy mark, especially under the watchful eye of his manager. As Mary moves closer to Houdini, her charms soon overwhelm him, and he realizes that he may be falling for this mysterious woman. But what began as a con now evolves into something much more complicated and dangerous than anyone could ever dream -- even as Houdini embarks on one of the most spectacular stunts of his career....
Greg Cox is the New York Times bestselling author of numerous Star Trek novels and short stories. He has also written the official movie novelizations of War for the Planet of the Apes, Godzilla, Man of Steel, The Dark Knight Rises, Daredevil, Ghost Rider, and the first three Underworld movies, as well as books and stories based on such popular series as Alias, Buffy the Vampire Slayer, CSI, Farscape, The 4400, Leverage, The Librarians, Roswell, Terminator, Warehouse 13, Xena: Warrior Princess, and Zorro. He has received three Scribe Awards from the International Association of Media Tie-In Writers, as well as the Faust Award for Life Achievement. He lives in Lancaster, Pennsylvania. Visit him at GregCox-Author.com.