The October Horse: A Novel of Caesar and Cleopatra (Paperback) 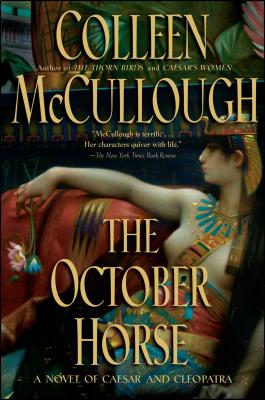 The October Horse: A Novel of Caesar and Cleopatra (Paperback)


Usually ships to store in 2-3 Days
With her renowned storytelling gifts in full force, Colleen McCullough delivers a breathtaking novel that proves once again that she is the top historical novelist of our time.

Grand in scope and vivid in detail, McCullough’s gripping narrative thrusts readers headlong into the complex and fascinating world of Rome in the tumultuous last days of the Republic. At the height of his power, Gaius Julius Caesar becomes embroiled in a civil war in Egypt, where he finds himself enraptured by Cleopatra, the nation's golden-eyed queen. To do his duty as a Roman, however, he must forsake his love and return to the capital to rule.

Though Caesar’s grip on power seems unshakable, the political landscape is treacherous—the returning hero has no obvious successor, and his legacy seems to be the prize for any man with the courage and cunning to fell Rome’s laurelled leader. Caesar’s jealous enemies masquerade as friends and scheme to oust the autocrat from power and restore true republican government to Rome. But as the plot races to its dramatic conclusion, it becomes clear that with the stakes this high, no alliance is sacred and no motives are pure.
Colleen McCullough, a native of Australia, established the department of neurophysiology at the Royal North Shore Hospital in Sydney before working as a researcher at Yale Medical School for ten years. She is the bestselling author of numerous novels, including The Thorn Birds, and lives with her husband on Norfolk Island in the South Pacific.
"An intelligent, page-turning epic that seamlessly mixes love, gore, and ambition." -- Kirkus Reviews