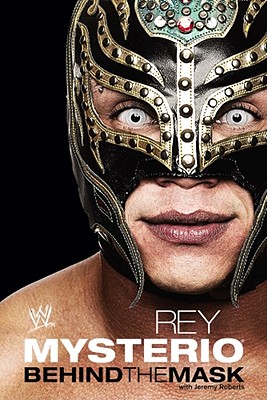 By Jeremy Roberts
Email or call for price.
Hard to Find

He's called the human highlight reel of professional wrestling. His high-flying acrobatics have thrilled fans on every continent. He's been crowned champion of the world's greatest wrestling promotions, from Mexico to the U.S. But he's never revealed the inside story of who he is.

Wrestling fans know him as Rey Mysterio, an American luchador of unparalleled talent, the ultimate proof that good things come in small packages. Now for the first time, Rey adds the personal side to the story:

• How he had to fight to get a tryout in the ring
• Who he was before Rey Misterio Jr. -- and even before Colibri, usually noted as his first identity
• What it was like to wrestle in Mexico -- from the bullrings to the riots
• How he fought plans for his unmasking in WCW -- and why he wishes he hadn't succeeded
• The inside story of the 619, the West Coast Pop, and his other signature moves
• The impact of Eddie Guerrero on his career in WWE
• The personal struggle that cost him ring time in 2008 but ultimately made him a stronger man
• His real passion in life as husband and father

In Rey Mysterio: Behind the Mask, Rey talks candidly about his twenty-plus-year career, from the days of sneaking into bars as a fourteen-year-old to his most recent showdowns in WWE. He speaks of the emotional moments in the ring with his uncle Rey Misterio, and the dark days when he went under the knife to repair his damaged knee. Along the way, Mysterio introduces American audiences to the mysteries of lucha libre, the high-flying, anything-goes Mexican wrestling style that he has done so much to popularize in the U.S. He also talks about the debts he owes to wrestlers such as Konnan, known as the Mexican Hulk Hogan, and dishes some behind-the-scenes dirt on the collapse of WCW at the height of the Monday Night Wars. Mysterio talks tenderly -- but realistically -- of his friend Eddie Guerrero, providing a well-rounded picture of one of the most beloved wrestling figures of recent history. He also details his march toward the Heavyweight Championship, and his mastery of the WWE Triple Crown -- a feat that placed him in an elite group for all time.

Behind the Mask is the intimate portrait of one of wrestling's all-time greats, a story wrestling fans of all ages won't want to miss.

Jeremy Roberts (cowriter) has written on a variety of subjects. His nonfiction work includes biographies of Mussolini and Joan of Arc for A&E Books.