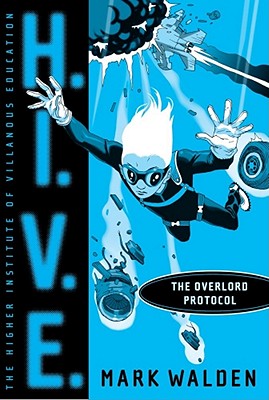 HOW FAR WILL OTTO GO TO PROTECT HIS FRIENDS?

Otto Malpense and his friends thought their first year at the Higher Institute of Villainous Education was the most adventurous and exciting that they would ever encounter. They were dead wrong.

When Otto and Wing are allowed off campus to attend Wing's father's funeral, they have no idea it's a trap, all part of a lethal plan organized by Cypher, the most ruthless supervillain any of them have ever known. He intends to use them to retrieve the Overlord Protocol, a device that has the capacity to help him take over the world. But when things go terribly wrong, Otto will stop at nothing to hunt him down and make him pay.

With the help of Laura, Shelby, Raven, and his former nemesis, Dr. Nero, Otto must find a way to defeat an enemy that has overcome some of the planet's most infamous villains without even breaking a sweat. Because if he doesn't, the world as they know it will be changed forever.

Mark Walden spent a decade as a video game designer and producer before becoming a fulltime writer and father. He has a BA in English Literature and an MA in twentieth century literature, film, and television, both from Newcastle University. He is the author of the H.I.V.E. series and the Earthfall Trilogy and lives with his family in the United Kingdom.