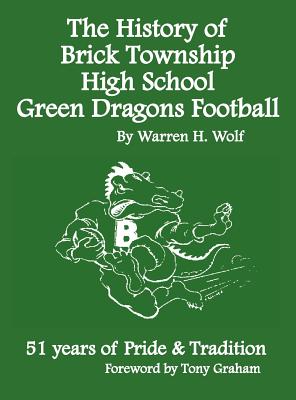 Warren H. Wolf. Brick Township High School Varsity Head Football Coach for 51 years from 1958-2008. A proud, humble, spiritual man, who came to Brick Township New Jersey in 1958 at the inception of Brick Township High School, after coaching for 10 years at Memorial High School in West New York, N.J. under the legendary Coach Joe Coviello. As the schools only head football coach, Coach Wolf compiled at state record 361 wins, 13 state titles (six of them during the sectional playoff era which began in 1974), 29 division titles, and 8 undefeated seasons. Wolf was not just a football coach in Brick Township. During his illustrious career, he was also a School Teacher, Business Administrator, Councilman, Board of Education member, Assemblyman, Freeholder, and yes the Mayor of Brick Township in 1972. Read how he guided his teams while teaching them life's lessons such as, kindness, caring, humility, respect, honor, pride, tradition, dignity, and integrity. Values that they will carry with them for the rest of their lives. Simply put Brick Township is Warren Wolf and Warren Wolf is Brick Township and Brick Township Green Dragon's football. A heartwarming feel-good book, you will enjoy reading "The History of Brick Township Football, 51 years of Pride and Tradition." This is a book about ordinary boys who were caught up in time in a comparatively new community. Although years old in time, but now many of amenities and siblings, in a new environment. Attending a new school somewhere along the Atlantic Ocean surrounded by already established municipalities. A Township that is to be united into one common element by a new high school and its brand new football team and program. This is a story about a football program consisting of teenage boys who were starving for identity in an unknown town. By boys were wanted to achieve and not be called "Clam diggers" or "kids with sand between their toes." But men, willing to train and become a team with one heartbea.