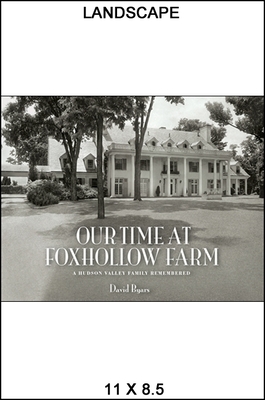 Our Time at Foxhollow Farm is a remarkable pictorial history of an eminent Hudson Valley family in the early decades of the twentieth century. Illustrated with the family's extensive collection of personal albums compiled during the nascent years of photography, it provides a fascinating insight into the regional, social, and architectural history of the era. In 1903 Tracy Dows, the son of a successful grain merchant from Manhattan, married Alice Townsend Olin, whose Livingston forebears had settled in the Rhinebeck, New York, area in the late 1600s. Dows purchased and combined several existing farms to establish his estate, Foxhollow Farm, next to Alice's ancestral home. He commissioned Harrie T. Lindeberg, a sought-after architect trained under Stanford White, to design the family home and other buildings on the property, and the Olmsted Brothers to landscape its rolling hills. The Dowses raised their three children on the estate, and led a busy social life of tennis tournaments, weddings, dinners, and dances with such friends and neighbors as the Roosevelts and the Astors. Tracy Dows devoted himself largely to the pursuit of agricultural and civic affairs at home and in the Rhinebeck community. Olin Dows, Tracy and Alice's son, became a notable painter active in President Roosevelt's Works Progress Administration. Our Time at Foxhollow Farm follows the Dows family from 1903 through the 1930s, documenting their life at home, social activities, and travels in America and Europe. An enthusiastic amateur photographer, Tracy Dows took many of this book's photographs himself, offering a vivid and warmly intimate perspective on privileged early twentieth-century American life.

David Byars is the Deputy Managing Editor of Vogue and has worked in magazine production for thirty-four years, with a strong emphasis on visual imagery. He was raised in Louisiana, where the antebellum plantation houses along the Mississippi River first sparked his interest in history and architecture. A graduate of Louisiana State University, he moved to New York City in 1982 and currently lives in the historic Bronx neighborhood of Spuyten Duyvil overlooking the Hudson River. He is a board member of Hudson River Heritage, a nonprofit organization in Rhinebeck, New York.