Blood and Smoke: A True Tale of Mystery, Mayhem and the Birth of the Indy 500 (Paperback) 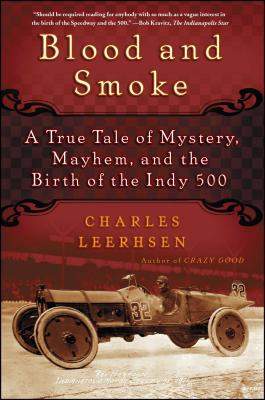 “History comes alive” (Kirkus Reviews) in the wild and true story of the first Indy 500 and the dawn of the automotive age—now in paperback.

Forty cars lined up for the first Indianapolis 500. We are still waiting to find out who won.

The Indy 500 was created to showcase the controversial new sport of automobile racing, which was sweeping the country. Daring young men risked life and limb by driving automobiles at the astonishing speed of seventy miles per hour with no seat belts, hard helmets, or roll bars. When the Indianapolis Speedway opened in 1909, seven people were killed, some of them spectators. Oil-slicked surfaces, clouds of smoke, exploding tires, and flying grit all made driving extremely hazardous, especially with the open-cockpit, windshield-less vehicles. Most drivers rode with a mechanic, who pumped oil manually while watching out for cars attempting to pass, and drivers would sometimes throw wrenches or bolts at each other during the race. The night before an event the racers would take up a collection for the next day’s new widows.

Although the 1911 Indy 500 judges declared Ray Harroun the official winner, there is reason to doubt that result, since Speedway authorities ordered the records to be destroyed. But Blood and Smoke is about more than a race. It is the story of America at the dawn of the automobile age, a country in love with speed, danger, and spectacle.

Charles Leerhsen is a former executive editor at Sports Illustrated. He has written for Rolling Stone, Esquire, and The New York Times. His books include Ty Cobb: A Terrible Beauty; Crazy Good: The True Story of Dan Patch, the Most Famous Horse in America; and Blood and Smoke: A True Tale of Mystery, Mayhem, and the Birth of the Indy 500. He is a winner of the SABR Baseball Research Award. He lives in Brooklyn with his wife, the writer Sarah Saffian. Visit him at Leerhsen.com.

"Should be required reading for anybody with so much as a vague interest in the birth of the Speedway and the 500."

On the centennial of the Indy 500, controversy still reigns over who won the inaugural race, as this lively account of a tumultuous event makes plain.


History comes alive through the research and prose of Leerhsen (Crazy Good: The Story of Dan Patch, the Most Famous Horse in America, 2008), formerly the executive editor of Sports Illustrated. The early days of auto racing ignited plenty of controversy—whether it was even a sport, whether it should be allowed (it seemed far more dangerous than bullfighting, outlawed in the States) and whether, as the New York Times wrote in an editorial headlined “Slaughter as a Spectacle,” the races “bring out the very worst of human nature by providing a most barbarous form of excitement…They are an amusement congenial only to savages and should be stopped.” If such controversy didn’t already give this book enough of a charge, the characters do, led by the entrepreneurial racetrack co-founder “Crazy” Carl Fisher, whose own wife characterized her impulsive, adulterous, reckless spouse as a “lusty and incomprehensible personality.” Then there are drivers such as Barney Oldfield, “the Daredevil Dean of the Roaring Road” who “didn’t have an altruistic bone in his body, but he had a very low threshold of boredom, and plain-vanilla racing excited him as much as it did the average citizen.” For years, plain vanilla appeared to be the only alternative to banishment, as the fledgling sport succumbed to offering a series of short races, much like horse racing, rather than the longer ones that would be more likely to push drivers to destruction and even death. “Which was, of course, why a lot of people came to the auto races,” writes Leerhsen. “Not to see death, exactly, in most cases—but to spend some time luxuriating in its titillating possibility.” And a surprising number of those most titillated were women, as the macho sport proved quite the chick magnet, and anything that suggested strategy was dismissed as “weakness, even femininity.”

By the time the big race rolls around, Leerhsen has already spun a fascinating tale.

"With alternating tales of horrifying crashes and the schemes of Carl Fisher, who promoted the Indianapolis Speedway as a venue for airplane races, this is a ripping good yarn of America in the early 20th century. Leerhsen, a witty storyteller, draws from contemporary articles, histories, and interviews to pull readers into a behind-the-scenes glimpse of the building of the Speedway and the first race.... this book has broad appeal, with laugh-out-loud stories and characters who would be unbelievable if they turned up in fiction. Highly recommended."

"Leerhsen provides an entertaining history of the automobile’s growth in the early twentieth century. . . . Along the way, readers are treated to sharply humorous social commentary bolstered by fascinating details of Indianapolis life and industry."