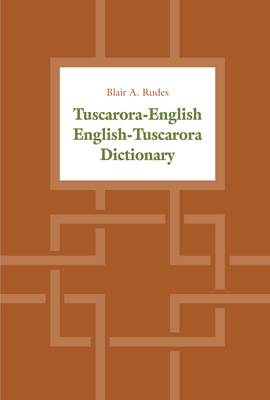 Twenty-five years ago, when Blair Rudes first began his research, there were still some fifty individuals who had learned Tuscarora as a first language and spoke it fluently. Rudes, who had the benefit of working with many of these speakers, has based his dictionary on their teachings. In addition, he draws from the extensive documentation of the language that dates back some 300 years.

Tuscarora is an Iroquoian language originally spoken by inhabitants of the Carolinas. Forced to flee northward in the early eighteenth century, the Tuscaroras are centred today in two main localities: the Six Nations Reserve at Grand River, Ontario, and the Tuscarora Indian Nation Reservation near Lewiston, New York. Only four or five Tuscaroras now remain who can speak their language fluently.

The dictionary is designed for use by the Tuscaroran people in reclaiming their language, and by anthropologists, historians, teachers, and linguists.