Henry II and Eleanor of Aquitaine: Founding an Empire (Hardcover) 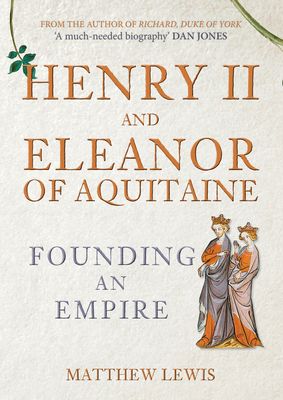 Henry II was the first Plantagenet king, the founder of England’s most successful and longest ruling dynasty. But Henry did not come to the throne alone. He had married Eleanor of Aquitaine, a formidable and powerful woman 10 years his elder. Eleanor had spent 15 years married to Louis VII of France before he divorced her, only to be angered when she married his young rival. Together, they were a medieval power couple who soon added the ultimate rank of King and Queen Consort to their list of titles.  Over the decades, a wedge was driven between the king and Eleanor. Henry imprisoned his wife, fought his elder sons and pinned his hopes on his youngest, whose betrayal was the last straw. This book will chart the early lives of Henry and Eleanor before they became a European power couple, examine the impact of their union on contemporaries and European politics before exploring the birth of the Angevin Empire and the causes of the disintegration of that vast territory.

Matthew Lewis is the author of Richard, Duke of York and The Survival of the Princes in the Tower.