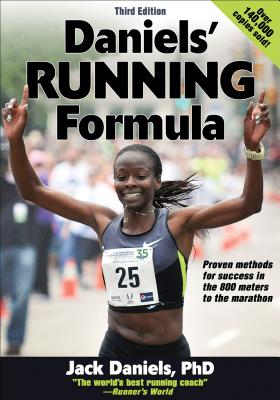 By Jack Daniels
Email or call for price.
Out of Print

Get in the best shape of your running career with the help of Daniels’ Running Formula, the book that Runner’s World magazine calls the best training book. Premier running coach Jack Daniels provides you with his legendary VDOT formula to guide you through training at exactly the right intensity to run stronger, longer, and faster.

Choose a program to get in shape, target a race program, or regain conditioning after layoff or injury. Train for competition with programs for 800 meters, 1500 meters to 2 miles, cross country races, 5K to 10K, 15K to 30K, and marathon events. Each program incorporates training intensities to help you build endurance, strength, and speed. With Daniels’ Running Formula, you’ll track the time you spend at each level, train more efficiently, and optimize results.

Completely updated with new chapters on altitude training, seasonal programming, and treadmill training, Daniels’ Running Formula, Third Edition, is the most comprehensive, accessible, and instantly applicable edition to date. Customizable to your current fitness level, competition goals, and schedule, the formula is the ideal solution for any race, anywhere, anytime.

Whether training or competing, get the results you’re seeking every time you lace up with the workouts and programs detailed in Daniels’ Running Formula.

Jack Daniels has been called the world’s best coach by Runner’s World magazine. He has more than 50 years of experience coaching and mentoring some of world’s top distance runners at both the collegiate and postcollegiate levels, including Jim Ryun, Penny Werthner, Ken Martin, Jerry Lawson, Alicia Shay, Peter Gilmore, Lisa Martin, Magdalena Lewy Boulet, and Janet Cherobon-Bawcom. He also won two Olympic medals and one world championship medal in the men’s modern pentathlon.

Daniels has decades of experience as a track and cross country coach at institutions such as Oklahoma City University, the University of Texas, Brevard College, and the State University of New York at Cortland. Under his guidance, Cortland runners won 8 NCAA Division III national championships, 30 individual national titles, and more than 130 All-America awards. He was named Women’s Cross Country Coach of the 20th Century by the NCAA Division III.

Since 1997 Daniels has been the national running coach advisor for the Leukemia/Lymphoma Society’s Team in Training program, which involves coaching thousands of marathon runners each year. He has also enjoyed coaching members of the Nike Farm Team and the Chasquis, a group of Peruvian marathoners.

Daniels has logged years of graduate study and research on distance running in both the United States and Sweden. He holds a doctoral degree in exercise physiology from the University of Wisconsin at Madison. He also studied exercise science at the Royal Gymnastics Central Institute in Stockholm under renowned sport scientist Per-Olaf Åstrand.

In recent years, Daniels has been an associate professor in the human movement program at A.T. Still University in Mesa, Arizona, in addition to coaching Olympic runners.

Of all his accomplishments, Daniels is most proud of his two daughters and being married to his wife, Nancy.

"When most people see the name Jack Daniels, they picture a whiskey bottle. But runners will think about the renowned coach and exercise physiologist. At 81, Daniels has had a bigger influence on training-for-running than anyone. Indeed, he might be considered the Albert Einstein of the sport. His 1998 book, Daniels' Running Formula, unlocked the mystery of appropriate training paces for runners of all abilities. His philosophy was simple: Do the minimum amount of work for the maximum payoff."

“In one way or another, today’s serious runners abide by training principles rooted in Jack Daniels’ research and philosophy and outlined in his famous book, Daniels’ Running Formula.”