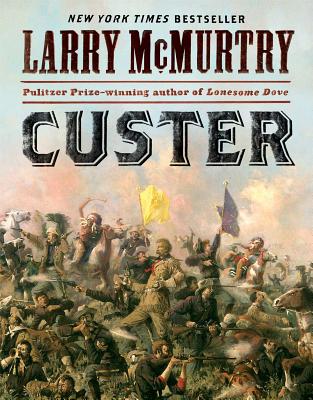 This lavishly illustrated volume reassesses and celebrates the life and legacy of the West's most legendary figure, George Armstrong Custer, from "one of America's great storytellers" (The Wall Street Journal). On June 25, 1876, General George Armstrong Custer and his 7th Cavalry attacked a large Lakota Cheyenne village on the Little Bighorn River in Montana Territory. He lost not only the battle but his life--and the lives of his entire cavalry. "Custer's Last Stand" was a spectacular defeat that shocked the country and grew quickly into a legend that has reverberated in our national consciousness to this day. In this lavishly illustrated volume, Larry McMurtry, the greatest chronicler of the American West, tackles for the first time the "Boy General" and his rightful place in history. Custer is an expansive, agile, and clear-eyed reassessment of the iconic general's life and legacy--how the legend was born, the ways in which it evolved, what it has meant--told against the broad sweep of the American narrative. It is a magisterial portrait of a complicated, misunderstood man that not only irrevocably changes our long-standing conversation about Custer, but once again redefines our understanding of the American West.

Larry McMurtry (1936-2021) was the author of twenty-nine novels, including the Pulitzer Prize-winning Lonesome Dove, three memoirs, two collections of essays, and more than thirty screenplays. He lived in Archer City, Texas.

“The celebrated novelist offers . . . fresh insights on the Custer story. . . . The distilled perceptions of a lifetime of study, beautifully illustrated.”

“Pulitzer Prize-winner McMurtry continues to be an outstanding chronicler of Western legend and lore.”

“One of America’s great storytellers.”

“Larry McMurtry has the power to clutch the heart and also to exhilarate.”

“McMurtry has reminded us that, in the hands of a maser, entertaining, old-fashioned storytelling rooted firmly in uniquely American experiences and landscape is pretty darn hard to beat.”

“McMurtry’s book does what dozens of others on Custer have not. It cuts through many of the myths. . . . It’s entertaining and educational at the same time.”

“It is plain speaking that McMurtry delivers . . . the same laconic, whimsical voice that makes his novels so entertaining and readable. The effect is as if one is sitting in a small lecture hall, listening as McMurtry tells his stories from a few notes in a rambling style . . . often revealing and insightful as well as wry and funny.”

“Larry McMurtry, chronicler of the American West, takes on the controversial figure of Lt. Col. George Armstrong Custer in his newest book . . . to contribute to the canon with a short biography that would help bring the complex man into focus.”

“Thoroughness wasn’t Larry McMurtry’s aim when he set out to write this brief treatment. . . . What McMurtry has produced is indeed appealing, with vivid images of Custer, his family and his battles. . . . Despite the lengthy consideration that the author has obviously given his subject. . . this is no hagiography.”

“The foremost chronicler of the American West adds new perspective to our understanding of the frontier experience with this coffee-table-format biography of George Custer.”

“It’s a keeper. . . . If you’re into Custerology or if you’re a history buff, there’s one word to remember when asked what you want this gift-giving season: ‘Custer.’ Because it’s truly impressive.”

“A brief, breezy tour of the man and the conflict, complete with an astonishing variety of photographs and artistic renderings. . . . The reader is in good hands; it’s as if McMurtry invited a customer to the back of his Texas bookstore to spend an afternoon going through his collection.”
-Timothy Egan