The Kings of Cool: A Prequel to Savages (Paperback) 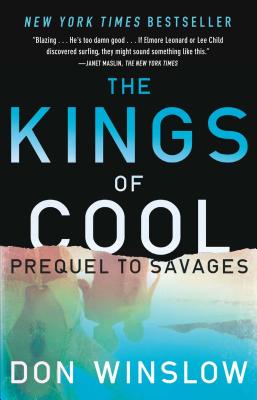 The Kings of Cool: A Prequel to Savages (Paperback)


Usually ships to store in 2-3 Days
From the New York Times bestselling author of The Cartel, The Force, and The Border

In Savages, Don Winslow introduced Ben and Chon, twenty-something best friends who risk everything to save the girl they both love, O. Among the most celebrated literary thrillers, Savages was a Top 10 Book of the Year selection by Janet Maslin in The New York Times and Stephen King in Entertainment Weekly.

Now, in this high-octane prequel to Savages, Winslow reaches back in time to tell the story of how Ben, Chon, and O became the people they are. Spanning from 1960s Southern California to the recent past, The Kings of Cool is a breathtak­ingly original saga of family in all its forms—fathers and sons, mothers and daughters, friends and lovers. As the trio at the center of the book does battle with a cabal of drug dealers and crooked cops, they come to learn that their future is inextricably linked with their parents’ history. A series of breakneck twists and turns puts the two generations on a collision course, culminating in a stunning showdown that will force Ben, Chon, and O to choose between their real families and their loyalty to one another.
Don Winslow is the acclaimed New York Times bestselling author of twenty-one novels, including City on Fire, The Force, The Cartel, The Kings of Cool, Savages, The Gentlemen’s Hour, The Dawn Patrol, The Winter of Frankie Machine, The Power of the Dog, and The Border. He lives in Southern California. To learn more, follow Don on Twitter @DonWinslow or visit DonWinslow.com.
“Blazing . . . Mr. Winslow's keen attention to drug culture isn't going to keep readers away from him. He's too damn good to be polarizing. His characters are smart about their self-interest. His dialogue is tight, laconic, and razor sharp; if Elmore Leonard or Lee Child discovered surfing, they might sound something like this.”
— Janet Maslin

“Made funnier by the seditious spin Winslow puts on the romanticized 1960s hippie culture of peace and love and hard drugs . . . [and boasts] the same pulsing rhythms and raw vocals that made “Savages” feel a little dangerous.”
— Marilyn Stasio

“Don Winslow, whose book The Kings of Cool, just came out, is a rarity among writers of fiction: He doesn't just make it up.”
— Chip McGrath

“A fast, fun, smart jazz-riff of a book, a prequel to Savages and every bit as good. . . . What sets Winslow apart in the crowded field of crime/mystery/thriller writers is the white-knuckled way he writes and thinks. The dialogue is sharp and funny, full of knowing nods to pop culture, history, and geography. . . . A frenzied ride into the heart of what family and love and loyalty mean.”
— John Wilkens

“Don Winslow's crackerjack Laguna Beach thriller The Kings of Cool . . . gives background and back story to Mr. Winslow's novel Savages, published in 2010 and just made into a film by Oliver Stone. . . . It's a treat to trace the crossings of this trio's paths with those of other characters over the years. . . . One way or another, they scheme and tough their way through this often gruesome, sometimes witty saga and into the future fates already devised for them.”
— Tom Nolan

“Blistering . . . Winslow serves up nonstop action, tempering the tension with his trademark razor-sharp wit. . . . This cool, clever entry is sure to be a royally popular summer read.”
— Booklist (starred review)

“A brilliant, hypnotic novel . . . So much more than a mere backstory . . . With a stylistic swagger and bucketloads of empathy to go with a scintillating, perfectly executed crime-novel plot.”
— The Independent (UK)

“As a former private investigator, Winslow knows his crime scene. . . . It’s tough not to be hooked.”
— USA Today