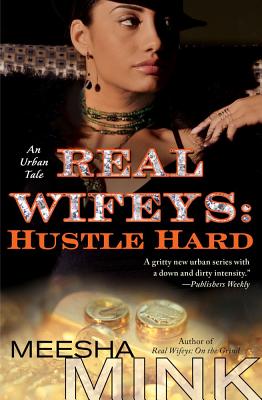 
Email or call for price
The final novel in the racy Real Wifeys series teems with crime, sex, and betrayal as Sophie “Suga” Alvarez confronts the demons of her past and gets pulled into a dangerous criminal lifestyle.

Sophie “Suga” Alvarez is all about two things: loving her man and making her money. Suga is the wifey of Dane, a man whose criminal lifestyle as a loan shark is in total contrast to her successful career in business. Dane swears he will go legit before they get married, but when their house is raided, Suga has to decide to avoid jail time by turning on him or standing by the man she loves. Things get more complicated when she steps in to run Dane’s business and has to use her book and street smarts to stay ahead of the game and out of the line of fire.

Meanwhile, when Suga learns the terrible truth about her father’s criminal past, she uncovers a secret that will change her relationship with her former best friend, Luscious, forever. Real Wifeys: Hustle Hard is the third and most explosive installment in a fierce and gritty series from one of today’s boldest voices in street lit.
Meesha Mink is the bestselling and award-winning author of more than thirty books written under three names, including the Real Wifeys series and co-authoring the explosive Hoodwives trilogy. She was born and raised in Newark, New Jersey, and lives in South Carolina.
"A well laid out plot spiced with wild sex. . . . Mink’s books are the real deal."
— Kirkus Reviews

“Mink’s brisk combination of insult, profanity, and pop culture is what street lit is all about….Another powerful story of women orbiting the hip-hop world. . . . Order in anticipation of high demand.”
— Library Journal

“A gritty new urban series with a down and dirty intensity that's heartbreaking.”
— Publishers Weekly

“Mink gives Kaeyla a snappy and profane voice laced with sarcasm…Female readers will love her, but men may want to check their own woman’s purse for taser wires. Load your shelves with multiple copies.”