Their Life's Work: The Brotherhood of the 1970s Pittsburgh Steelers (Paperback) 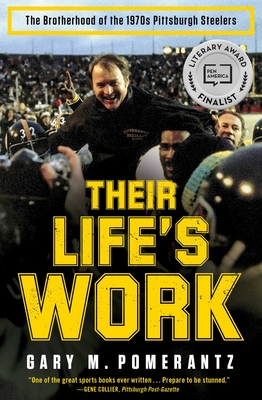 “The definitive book of the 1970s Pittsburgh Steelers” (Scott Brown, ESPN), Their Life’s Work is a triumphant yet intimate literary sports book that—through exquisite reportage, love, and honesty—tells the full story of the best team to ever play the game.

The Pittsburgh Steelers of the 1970s won an unprecedented and unmatched four Super Bowls in six years. A dozen of those Steelers players, coaches, and executives have been inducted into the Hall of Fame, and three decades later their names echo in popular memory: “Mean” Joe Greene, Terry Bradshaw, Franco Harris, Mike Webster, Jack Lambert, Lynn Swann, and John Stallworth. In ways exhilarating and heartbreaking, they define not only the brotherhood of sports but those elements of the game that engage tens of millions of Americans: its artistry and its brutality.

Drawing on hundreds of interviews, Their Life’s Work is a richly textured story of a team and a sport, what the game gave these men, and what the game took. It gave fame, wealth, and, above all, a brotherhood of players, twelve of whom died before turning sixty. To a man, they said they’d do it again, all of it. They bared the soul of the game to Gary Pomerantz, and he captured it wondrously. “Here is a book as hard-hitting and powerful as the ‘Steel Curtain’ dynasty that Pomerantz depicts so deftly. It’s the NFL’s version of The Boys of Summer, with equal parts triumph and melancholy. Pomerantz’s writing is strong, straightforward, funny, sentimental, and blunt. It’s as working class and gritty as the men he writes about” (The Tampa Tribune, Top 10 Sports Books of the Year).

Gary M. Pomerantz is a nonfiction author and journalist and has served the past seven years as a visiting lecturer in the Department of Communication at Stanford University. His work has appeared in The Wall Street Journal, The New York Times, and The Washington Post. Pomerantz has written four books, including Their Life’s Work and the New York Times Notable Book of the Year, Where Peachtree Meets Sweet Auburn.

"I've been waiting for a book, written in an exhilarating and cogent and intelligent way, on the best football team of my adult life, and now it's here. I loved the Steelers way back when, and now that I know them in their middle age and beyond, I love their story. That's not just because Joe Greene and Terry Bradshaw and Jack Lambert are compelling figures. It's because Gary Pomerantz wrote it the way Roger Kahn wrote 'Boys of Summer.' This book will be 'Men of Fall' for my football generation.''
— Peter King, senior writer, Sports Illustrated.

"What sets Their Life's Work well above other books that tell us about teammates in their glory and their dotage, is that Gary Pomerantz not only brings such flair to the Steelers' glory days, but he also instructs us so vividly how, in football, teammates don't just grow old, they grow in pain and fear."
— Frank Deford

"What has become of the best team ever? Pomerantz has the story, the lowdown and the afterglow. A wealth of prime Steeler stuff."
— Roy Blount Jr., Author of About Three Bricks Shy of A Load

"Their Life's Work is that rare book that is brutally authentic, vigorously reported, smoothly written, and hauntingly sympathetic all at the same time. Sport , coach, team, city, sensibility all powerfully rendered."
— David Maraniss, Author of When Pride Still Mattered: A Life of Vince Lombardi

"Their Life's Work is a behind the scenes and revealing look at what I consider one of the three greatest NFL football teams since World War II. Having competed against the 1970s Pittsburgh Steelers, I didn't think it was possible to learn more about this team, but Gary Pomerantz has uncovered so many intriguing details on how this great ball club was masterfully put together, along with fascinating new insights into the great characters who played on these championship teams, I see them in a new light. This is one great football book."
— Ernie Accorsi, Former General Manager of the New York Giants, Cleveland Browns, Baltimore Colts

“This is a special book about a special moment in a special town. You cannot understand one of America's great cities today without understanding the special place the Steelers hold in Pittsburgh—and, unless you have season tickets, you cannot fully understand Pittsburgh without Their Life's Work.”
— David M. Shribman, Executive Editor, Pittsburgh Post-Gazette and The Pittsburgh Press

"Their Life’s Work will be compared to Roger Kahn’s The Boys of Summer (1972), a nostalgic look back at the 1950s Brooklyn Dodgers. As good as Boys is, this is better. . . A wonderful book."
— Booklist (starred)

“Gary Pomerantz's Their Life's Work: The Brotherhood of the 1970s Pittsburgh Steelers is the vessel in which the current generation can travel back to those days and immerse itself in the history of this franchise…. [A] dramatic, inspiring and wondrous tale of brotherhood, camaraderie and spirit…. It's the text book for Steelers 101. It's the Bible for Steelers Spirituality 201. It's the reading material necessary to pass a citizen's test for entry into Steeler Nation, and all residents should be issued it upon their arrival.”
— Neal Coolong