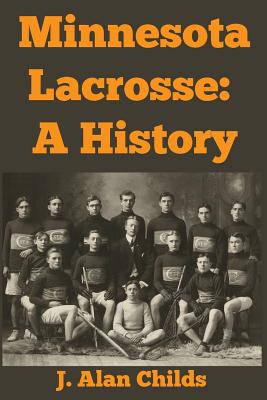 Minnesota Lacrosse has a rich history that ranges from the arrival of the Ojibwe who brought the game with them to Minnesota, to the white settlers who led the state to a National Championship. This books documents these events and more about the story of lacrosse in Minnesota. Bonuses include: A lacrosse rules origins and evolution Women's Lacrosse origins and why its different Minnesota and Lacrosse timeline Review and rosters of all Olympic appearances The role of boarding schools in the decline of lacrosse. Doing a book report on lacrosse? This is your source for the history of Midwest lacrosse.

Minnesota Lacrosse: A History - The Book You Need To Read By Mark Donahue (LaxAllStars) - December 22, 2015 The lacrosse community owes a big thank you to Alan Childs, author of Flamethrowers, for taking the time to put together his latest work, Minnesota Lacrosse: A History. There's not a lot of them, but there are a few "lacrosse historians" spread far and few between. We know lacrosse has some of the deepest roots and traditions in the sporting world, but much of its history has gone long unrecorded. As we know, the sport comes from various forms of Native American stick-ball games, yet most Native American cultures used no sort of written language as the game developed, thus causing a huge gap in its historic record. On top of the that, lacrosse has lacked significant publicity compared to the mega-sports that dominate American media. That isn't to say there hasn't been books, newspaper articles, film and other media produced about the game dating back to the 1800s. But if it's not on Google, how will we ever learn the roots of the game? Luckily we have people like Alan Childs to humbly do all of the hard work for us. Childs dedicated years to traveling countless miles to libraries, historical societies, Native American places of interests and dozens of other locations where he spent innumerable, tiring hours digging through archives, meeting with other storytellers and collecting the research needed to put together one of the most thorough pieces of the lacrosse history puzzle. Although his book is regionally specific, Minnesota Lacrosse: A History tells more than the state's involvement in the game. Childs connects Minnesota to the growth of the game around the globe, dating from the 16th century when the Ojibwe Nation brought lacrosse to Minnesota after their journey from the St. Lawrence River Valley, to the addition of the first NCAA Women's Lacrosse programs in the state in 2014 and all of the region's influence in the years between. From cartoons to newspaper clippings, vintage photography to photos of historic artifacts, Childs cut no corners to document the influence lacrosse had on Minnesota. A lacrosse fan would be hard pressed to find more throwback photos of the game from the early 1900s in one place, it really makes you wonder what else is out there, undiscovered, about lacrosse history from other parts of the country!