Dare to Tri: My Journey from the BBC Breakfast Sofa to GB Team Triathlete (Paperback) 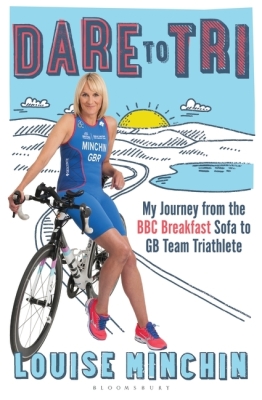 Dare to Tri is the amazing story of TV presenter Louise Minchin's journey from the BBC Breakfast sofa to representing Great Britain at the World Triathlon Championships. This is a warmly written and wonderfully honest adventure-through-sport that will both entertain and inspire.

'I didn't even know what a triathlon was before 2012… When I took up the sport three years ago I didn't imagine for a second then, that, one day, I would be able to represent my country internationally.' Louise Minchin

What started out as a fun BBC Breakfast cycling stunt in 2012 culminated in Louise Minchin wearing the colours of Great Britain at the World Triathlon Championship in 2015 – this is the story of how a newly discovered sport became a passion and then an obsession.

Dare to Tri charts Louise Minchin's incredible journey as she rediscovers competitive sport after 30 years and takes her first tentative steps as a triathlete. As her performances improve, there's a realisation that representing the Great British team in her age group is a possibility and the book tells of her plucky attempt to achieve this almost-unthinkable goal.

It is an adventure not without its challenges as Louise has to overcome personal nerves, a brutal training regime, the odd bike crash and the occasional drama.

Enjoy the ride as Louise Minchin challenges herself to represent Great Britain in triathlon.

Louise Minchin is one of the UK's best known news presenters and television broadcasters. For more than four years she has been the anchor of BBC Breakfast, the UK's most popular breakfast programme.

She has presented the One O'clock News, guest presents on BBC Radio Four's You and Yours and contributes to the BBC One Show . Louise presented five series of Real Rescues and was a finalist on Celebrity MasterChef 2016. She has two daughters and is a GB Age-Group Triathlete.

"Louise’s amazing journey to becoming a triathlete encourages us all to be a little more adventurous." - Dame Darcey Bussell

"If youwant to be inspired, run, cycle or swim to your nearest bookshop to get Dare to Tri, the enthralling story ofher journey from BBC breakfast sofa to super athlete." - Sunday Mirror