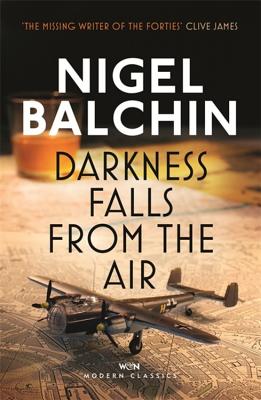 The classic novel of the London Blitz, DARKNESS FALLS FROM THE AIR captures the chaos, absurdity and ultimately the tragedy of life during the bombardment.

Bill Sarratt is a civil servant working on the war effort. Thwarted at every turn by bureaucracy and the vested interests of big business, the seemingly unflappable Bill is also on the verge of losing his wife Marcia to a literary poseur named Stephen. As the bombs continue to fall, Bill must decide whether he his willing to compromise his principles and prevent his life from crumbling before his very eyes.

Nigel Balchin was born in 1908 and graduated in Natural Science from Cambridge University. During the Second World War he worked as a psychologist in the personnel section of the British War Office, before becoming Deputy Scientific Advisor to the Army Council. He wrote numerous books, including How to Run a Bassoon Factory (under the pseudonym Mark Spade), and Darkness Falls from the Air. He died in 1970.
One of the hopes of British novel-writing . . . A writer of genius—John Betjeman

The missing writer of the Forties . . . Balchin's professional skill gives a meaning to brilliance which the word doesn't usually possess—Clive James, NEW REVIEW

Balchin writes about timeless things, the places in the heart—Ruth Rendell, SUNDAY TELEGRAPH

Balchin has been absurdly overlooked for too long—Julian Fellowes

I'd place him up there with Graham Greene—Philippa Gregory

A brilliant novelist . . . A writer of real skill—NEW STATESMAN

He tells a story gloriously—DAILY TELEGRAPH

Probably no other novelist of Mr. Balchin's value is so eminently and enjoyably readable . . . [He] never lets the reader down—Elizabeth Bowen, TATLER

The novelist of men at work—GUARDIAN

Mr. Balchin is a writer of such considerable and varied gifts . . . He is certainly one of the most intelligent novelists—TIME AND TIDE

A little masterpiece like Nigel Balchin's The Small Back Room speaks to our own time, but with so much literary experience behind it—Shirley Hazzard