Henry V, Holy Warrior: The Reign of a Medieval King in Context (Paperback) 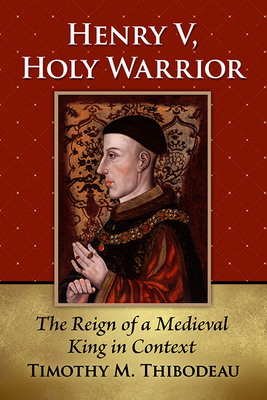 Henry V, Holy Warrior: The Reign of a Medieval King in Context (Paperback)

King Henry V saw his reign and military efforts in France as a holy crusade to reclaim the French throne for his ancestors. Almost everything he did was governed by a well-thought-out philosophy that united political power, religious devotion and military success. This book includes the most up-to-date research on Henry V's reign, with a focus on historiography. His role in English history, as well as his actions as a ruler and military commander, are discussed throughout the text. This approach demonstrates how historians interact with a complicated academic literature that oscillates between hero worship and vilification of Henry. In the end, Henry V is measured by the standards of his day and was unquestionably a successful warrior king.
Timothy M. Thibodeau is a professor of history at Nazareth College of Rochester in New York. He has published extensively on the history of Christianity in the Middle Ages. He also has been a contributor to national and international media outlets, including the History Channel.