Bullies: How the Left's Culture of Fear and Intimidation Silences Americans (Paperback) 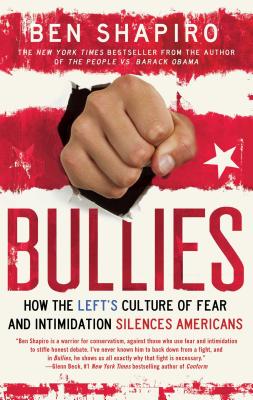 In this galvanizing and alarming New York Times bestseller, “Ben Shapiro shows once and for all that the left is the single greatest source of bullying in modern American life” (Sean Hannity).

While President Obama and the left like to pretend that they oppose bullying with all their hearts and souls, the truth is far darker: the left is the greatest purveyor of bullying in modern American history. Bullying has morphed into the left’s go-to tactic, as they attempt to quash their opponents through fear, threat of force, violence, and rhetorical intimidation on every major issue facing America today.

In Bullies, Ben Shapiro uncovers the simple strategy used by liberals and their friends in the media: bully the living hell out of conservatives. Play the race card, the class card, the sexism card. Use any and every means at your disposal to demonize your opposition—to shut them up. Then pretend that such bullying is justified, because, after all, conservatives are the true bullies, and need to be taught a lesson for their intolerance. Hidden beneath the left’s supposed hatred of bullying lies a passionate love of its vulgar tactics.

Dubbed by Glenn Beck “a warrior for conservatism, against those who use fear and intimidation to stifle honest debate­­,” Shapiro takes on the leftist bullies—the most despicable people in America. By exposing their hypocrisy, he offers conservatives a reality check in the face of what has become the gravest threat to American liberty: the left’s single-minded focus on ending political debate through bully tactics.

"Ben Shapiro is a warrior for conservatism, against those who use fear and intimidation to stifle honest debate. I’ve never known him to back down from a fight and, in Bullies, he shows us all exactly why that fight is necessary.”
— Glenn Beck, #1 New York Times bestselling author of Cowards

“Ben Shapiro has a great new book out called “Bullies: How the Left’s Culture of Fear and Intimidation Silences America.” Ben’s premise about the left’s silencing tactics is absolutely correct. Obviously I’ve witnessed the left’s bullying behavior up close and personal when it’s been directed at those so close to me…Please read Ben’s book and consider his advice about how we must stand up and push back twice as hard against this bullying. We must not allow ourselves to be frightened into silence.”
— Sarah Palin

"In Bullies, Ben Shapiro shows once and for all that the left is the single greatest source of bullying in modern American life. Their goal: to shut down the political debate in the name of political correctness. Don't let them shut you up -- read Bullies, and learn how to fight back!"
— Sean Hannity, #1 New York Times bestselling author of Conservative Victory

"Bullies is a rousing manifesto against liberal thuggery. Meticulously documented and deeply personal, this book will infuriate AND inspire you. Shapiro exposes all the Left's menaces...infused with the indomitable spirit of his friend and mentor Andrew Breitbart, Shapiro issues a passionate call to arms."
— Michele Malkin, #1 New York Times bestselling author of Culture of Corruption

"Bullies will shock you with its point-by-point, fiery deconstruction of the left's strong-arm strategy for silencing conservatives. You don't know the left until you've read Bullies. And you won't be able to beat them unless you do."
— David Limbaugh, #1 New York Times bestselling author of The Great Destroyer