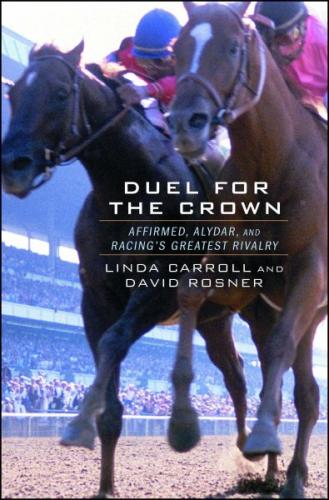 A gripping look at the great duel between Affirmed, the last horse to win the Triple Crown—comprised of the Kentucky Derby, the Preakness Stakes, and the Belmont Stakes—and his archrival, Alydar.

From the moment they first galloped head-to-head in Saratoga Springs, the two chestnut colts showed they were the stuff of racing legend. Alydar, all muscle with a fearsome closing kick, was already the popular favorite to win the Kentucky Derby. Affirmed, deceptively laid-back streamlined elegance, was powered forward by his steely determination not to settle for second place.

In the Sport of Kings, the Triple Crown is the most valued prize, requiring a horse to win not just one race, but three: the Kentucky Derby, the Preakness Stakes, and the Belmont Stakes. And 1978 would not be just for the record books, but also one of the greatest dramas ever played out in the racing world.

There were names to conjure with, worthy of the Sport of Kings. The bloodline of Native Dancer. The teen wonderboy jockey Steve Cauthen. The once unbeatable Calumet Farm—the Damn Yankees of the racing world—now in eclipse and hoping for a comeback. The newcomer Harbor View Farm—owned by brash financier Louis Wolfson, who wouldn’t let even a conviction and a prison sentence for securities violations stand in the way of his dreams of glory. And the racetracks themselves: Belmont, Saratoga, Pimlico. And, of course, Churchill Downs.

It has been thirty-five years since Affirmed and Alydar fought for the Triple Crown, thirty-five years when no other horse has won it. Duel for the Crown brings this epic battle to life. Not just two magnificent Thoroughbreds but the colorful human personalities surrounding them, caught up in an ever-intensifying battle of will and wits that lasted until the photo finish of the final Triple Crown race . . . and Alydar and Affirmed leaped into the history books.

Throughout her two decades as a nationally respected health and fitness writer, Linda Carroll has mastered the art of making complex subjects entertaining and accessible for the average reader. She has written for a wide range of prominent publications, including The New York Times, SmartMoney, Health, and MSNBC.com. Currently, she is a contract writer for NBC News, covering health and business. An accomplished equestrian, Carroll brings more than thirty years of experience in breeding, training, and showing horses. For the past two decades, she has owned and operated Fiery Run Farm, where she has hands-on control of breeding and training her twelve Arabian and Oldenburg sport horses. For more information, visit the farm’s website at FieryRunFarm.com.

For three decades, David Rosner has worked as a sportswriter at major metro newspapers and national magazines. As an award-winning staff writer at Newsday in New York, he spent twelve years covering the full gamut of pro sports—including horse racing. He has covered racing since the spring of ’77 when his first bylined stories as a cub reporter chronicled the harrowing Belmont spill that hospitalized the teen sensation Steve Cauthen. Rosner earned national Associated Press Sports Editors Association awards for investigative reporting and for deadline writing as well as New York State AP and UPI awards for enterprise journalism. He also served as editor-in-chief of the national hockey magazine Rinkside and coauthored The Official Illustrated NHL History.