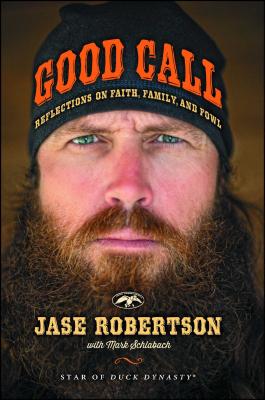 The straight-faced, funny man of Duck Dyanasty has a real story to tell. Not a repeat of the previous Duck Dynasty books, Jase opens up about his personal family life, his childhood days with a drunken father, and how he came to faith.

This open book from Jase may surprise some fans who love him for his dry humor and rivalry with younger brother Willie. This hilarious, yet thoughtful book, is structured around lessons of faith in the blind on topics like respect, passion, forgiveness, generosity, humility, kindness, and honesty. Chapters discuss: the highlights of Jase's memory of the early days with his drunken, disruptive father; his high school days and his strong commitment to not be like Phil had been, opting for total abstinence from drinking and sex; the moment he forgave Phil for being such a terrible father in his younger days; his first hunt with Phil, where he saw an excitement in Phil that he'd never seen before; his first date with Missy, which was a "fake date" to make another girl jealous; and of course, a chapter on Uncle Si, with stories not told in previous books. Other chapters include stories of his brothers, frog hunting and fishing, and his most memorable road trips. And finally, Jase shares a chapter on hunting in heaven. Here, Jase shares his love for the land and our responsibility to care for it. More than a behind-the-scenes look at this beloved Duck Dynasty character, readers will be inspired and encouraged to implement Jase's lessons from the blind into their own lives.

Jase Robertson is the second oldest Robertson son and one of the favorite stars of A&E®’s Duck Dynasty®. Jase has been involved in the family business making duck calls since he was a boy. He graduated from Bible college after high school and worked part-time in ministry for two years before becoming Duck Commander’s first paid employee in the mid ‘90s. Now, family, hunting, and helping the family business succeed consume most of Jase’s time. Jase runs the manufacturing part of Duck Commander, making sure that every call is hand-tuned to be the best possible call. He and his wife, Missy, live in West Monroe, Louisiana, with their children and the rest of the Robertson clan.

Mark Schlabach is the coauthor of the New York Times bestselling books, Happy, Happy, Happy, Si-cology 1, and The Duck Commander Family. He is one of the most respected and popular college football columnists in the country. He and his wife live in Madison, Georgia, with their three children.