The Rosie Effect: A Novel (Paperback) 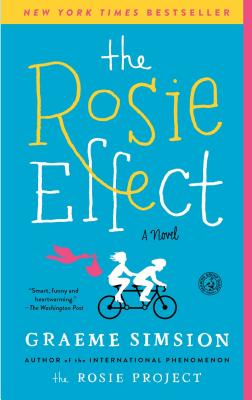 The Rosie Effect: A Novel (Paperback)

“If you loved The Rosie Project, you'll love knowing what happens next to Don and his new wife, Rosie, as they settle into their lives in New York City and find out that Rosie is pregnant! Rosie may love Don, but neither of them is sure if he's ready to be a father. This book is as warm as the original and as full of Don's humorous -- and cringe-worthy -- misunderstandings of social behavior.”
— Kate Madison, Penguin Bookshop, Sewickley, PA

With The Rosie Project, “Graeme Simsion achieved the impossible and created an entirely new kind of romantic hero,” Jojo Moyes, author of Me Before You said. Now Don Tillman returns in the hilarious and charming sequel to the international sensation. Get ready to fall in love all over again.

Don sets about learning the protocols of becoming a father, but his unusual research style gets him into trouble with the law. Fortunately his best friend Gene is on hand to offer advice: he’s left Claudia and moved in with Don and Rosie.

Picking up where The Rosie Project left off, The Rosie Effect is a fun, hilarious, and poignant read. “Don Tillman helps us believe in possibility, makes us proud to be human beings, and the bonus is this: he keeps us laughing like hell” (Matthew Quick, author of The Silver Linings Playbook).
Graeme Simsion is the internationally bestselling author of The Rosie Project, The Rosie Effect, and The Rosie Result, featuring Professor Don Tillman, as well as The Best of Adam Sharp and, with Anne Buist, Two Steps Forward. Graeme lives in Australia.
“In his bestselling debut, The Rosie Project, Simsion introduced the delightfully original character of Don Tillman, an Australian geneticist with Asperger’s syndrome who sets out to find the perfect wife by using the scientific method. In the sequel, set in New York, Don takes on impending fatherhood in the same clumsy yet endearing way, with results both funny and moving. This charming new chapter in the Tillman chronicles leaves you hoping it won’t be the last.”
—People

“Though painfully aware of his emotional shortcomings, Don determinedly sets out to be a good dad. Hilarity ensues…Simsion’s tale offers a playful look at a how a family of two fare when a third…enters the mix...There’s a moral to this quirky story: The best things in life can’t be planned on a spreadsheet.”
—Good Housekeeping

“The hilarious follow-up to The Rosie Project, one of the best novels I’ve read in ages. There’s no sophomore slump here. Simsion brings back some of the best characters and gags from the first novel while also bringing in enough new elements to keep it fresh. It’s a funny novel that also made me think about relationships: what makes them work and how we have to keep investing time and energy to make them better. A sweet, entertaining, and thought-provoking book.”
—Bill Gates, "Top Five Books of 2014"

"Don and Rosie are back!...Readers who loved the first book are in for another treat."
—Library Journal (starred review)

"The Rosie Effect is a celebration of the best attributes to be found in a friend, a husband, or a father, regardless of the way they are expressed." —Booklist (starred review)

“This is a very funny book, possibly the funniest this year as Don organizes his and Rosie's life in New York…Every thought creates a smile for the reader who can't help responding to Don's comedic behavior…We can only hope the third installment is lurking around to produce another chuckle-filled triumph.”
—Daphne Guinness, Sydney Morning Herald

Praise for The Rosie Project

“Sometimes you just need a smart love story that will make anyone, man or woman, laugh out loud.”
—San Francisco Chronicle

“Move over, Sheldon Cooper. There’s a new brilliant, socially inept scientist poised to win over a huge audience, and his name is Don Tillman, in The Rosie Project. . . .This rom-com is bursting with warmth, emotional depth, and intentional humor.” (A–)
—Entertainment Weekly

“An utterly winning screwball comedy. . . . If you’re looking for sparkling entertainment along the lines of Where’d You Go, Bernadette and When Harry Met Sally, The Rosie Project is this season’s fix. . . . This charming, warmhearted escapade, which celebrates the havoc—and pleasure—emotions can unleash, offers amusement aplenty. Sharp dialogue, terrific pacing, physical hijinks, slapstick, a couple to root for, and more twists than a pack of Twizzlers—it’s no surprise that The Rosie Project is bound for the big screen. But read it first.”
—NPR.org

“Filled with humor and plenty of heart, The Rosie Project is a delightful reminder that all of us, no matter how we’re wired, just want to fit in.”
—Chicago Tribune

“Simsion’s attention to detail brings to life Don’s wonderful, weird world. Instead of using Don’s Asperger’s syndrome as a fault, or a lead-in to a tragic turn of events, Simsion creates a heartwarming story of an extraordinary man learning to live in an ordinary world, and to love. As Don would say, this book is ‘great fun.’”
—USA Today

“It’s natural to be wary of a novel that’s been the target of such gushy praise. Publishers in at least thirty-eight countries have snapped up the rights to The Rosie Project, which has been touted as a ‘publishing phenomenon,’ an ‘international sensation’ and no less than ‘the feel-good hit of 2013.’ Well, squelch your inner cynic: the hype is justified. Australian Graeme Simsion has written a genuinely funny novel. . . . This is classic rom-com.”
—The Washington Post