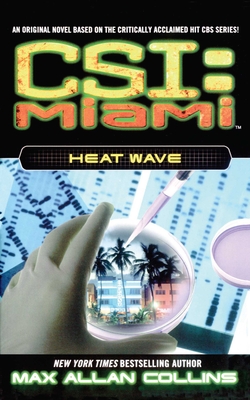 
Usually ships to store in 2-3 Days
This first in a series of novels based on the hit TV show CSI: Miami, details all-new cases that the popular forensic investigators must solve.

Lieutenant Horatio Caine leads a crack team of forensic scientists who investigate crimes amid the tropical surroundings and cultural crossroads of Miami. Together, they collect and analyze the evidence to expose the truth and to bring justice to those who often cannot speak for themselves: the victims.

Crime boss Kurt Wallace was fighting to hold his vast crime empire together—until a few well-placed bullets ended the struggle. As a host of dangerous "business interests" move in to seize control of Wallace's piece of the Miami underworld, Caine's CSIs must piece together the evidence to discover who was responsible for the crime that all of Miami had a motive to commit.
Max Allan Collins is a New York Times bestselling author of original mysteries, a Shamus award winner and an experienced author of movie adaptions and tie-in novels. His graphic novel Road to Perdition has been made into an Academy Award-winning major motion picture by Tom Hank’s production company. He is also the author of several tie-in novels based on the Emmy Award-winning TV series CSI: Crime Scene Investigation.